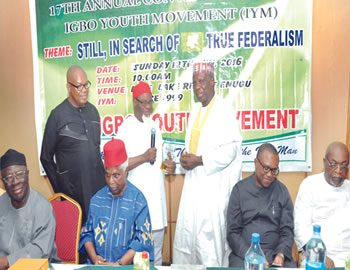 South-East Bureau Chief, JUDE OSSAI, was at the 17th convention of the  Igbo Youth Movement (IYM) where eminent Nigerians were honoured and critical national issues discussed. His report:

THe  17th Igbo Youth Movement (IYM) annual convention held on June 12, 2016 has come and gone but the event would continue toreverberate in the minds of many people particularly those who were present at Nike Lake Hotel, Enugu, which was the venue of the occasion. Indeed, among the first callers at the venue of the event were Chief Ayo Adebanjo, Director of the African Newspaper of Nigeria (ANN Plc), Ibadan and Dr Arthur Nwankwo. Both were former NADECO chieftains.

Chief Adebanjo was very visible in the Igbo summit which coincidentally took place the same day lovers of democracy within and outside the country marked the annulment of June 12,  1993 presidential polls considered by many to have been won by Chief MKO Abiola (now of the blessed memory)         Although the organizers of the event did not explain why it was shifted from May 26, this year to June 12, however, it kicked-started at about 11am on a smooth note with the founder and national leader of the IYM, Evangelist Ukoh ushering distinguished guests to the high table.

As observed, the event was centred on awards to five Nigerians who had contributed meritoriously to the nation and was followed with remarks by the recipients Chief Adebanjo who was bestowed “Great National Icon” set the ball rolling when he delved boldly into the state of the nation proffering panacea to the socio-economic and political woes engulfing the country.

He took time to explain to the large audience dominated by tertiary students on the need to make Nigerians, irrespective of their ethnic backgrounds, live in harmony, reiterating that only true federalism will bring a lasting solution to the bottled anger and restiveness in the land.

“The experiment to rule the country by the colonial masters as a nation under a unified central government proved a failure as it gave rise to political agitation and crises in several parts of the country. Going down memory lane, he remarked, “On occasion like this, it is important to remind ourselves where we are coming from. It is an historical fact that our country Nigeria is not a nation but a conglomeration of various ethnic nationalities which we were colonised by the British colonialists at various time in their different localities.

According to him, from the Richard Constitution to the military rule and up to this day, Nigerians were subjected to various acts of political agitation because the constitution under the people are governed is not suitable for an heterogenous society like Nigeria. Chef Adebanjo recalled how the late Sage, Chief Obafemi Awolowo said “Nigeria is not a nation but a geographical expression made up of various ethnic nationalities diverse in language, culture and religion.

“It is my strong view that to put a stop to the various acts of uprising in the country today be it Niger Delta Avengers, MASSOB, IPOB. or the new agitation for state of Biafra will require a change of our constitution to allow for the restructuring of the country under a truly federal system. Then, and only then, can we have peace in the country without which there can no progress”.

Chief Adebanjo therefore warned, “ The use of force to cow down these agitators can never succeed, And so, it is Altus continua in search for true federalisM.  As a matter of fact, all the Speakers including the former Vice President, Alex Ekwueme, Professor Jerry Gana, Ex-governors Chukwuemeka Ezeife, Peter Obi, and Mrs. Ankio Briggs agreed that only true federalism will bring peace to the country. Chief Ekwueme who reviewed how he had advocated true federalism, stated that every disappointment was a blessing, noting that his incarceration in 1984 at Kirikiri prison by the military afforded him the opportunity to reflect deeply on Nigeria’s problems.

According to him, he came out with the idea of six geo-political zonal structures, which he pushed for in a national conference much later and it became a convention, and has taken care of minorities in the South and North.     He stated that what Nigeria negotiated for and agreed with colonial masters before independence was a regional government where each has a constitution, which were annexed to the Republican constitution of 1963. According to him, the Republican Constitution then provided 50 percent revenue sharing formula for the regions, 30 percent to a distributable pool, and 20 percent to centre.       “There is need for us to return to the basics from what we inherited from our founding fathers,” he said.

Mrs. Briggs, National Leader of the Niger Delta Self-Determination Movement (NDSDM),  was a bit revolutionary in her approach as she faulted nothing wrong with a person or group of persons expression themselves, stressing, “our diversity is not our problem but those who manipulate our diversity. Our story now is that of frustration. Change should be based on truth and if it is not based on truth, another group can come up and demand for a change and that is what we are witnessing in the country now”

Briggs said that the country was so-lopsidedly run that the Federal Government, which should depend on taxes from the regions was giving the crumbs to the very regions which fed it fat. She also lampooned the Federal Government for threatening to destroy Gbaramatu community in the Niger Delta Region if the people of the area failed to produce Government Ekpemupolo, popularly called “General Tompolo” over alleged civil offence of contractual agreements while turning a deaf ear to those, who beheaded an Igbo woman in Kano for alleged blasphemy. According to her, the Federal Government should ask both the governor and Emir of Kano to produce the killers of the Igbo woman in their domain instead of purportedly arresting suspects for the heinous offence.

“A governor blasphemed Jesus Christ in the north, but he is still serving in that office today. Blasphemy is not part of ournational law. How can the ruling government say that it will work for 95 per cent of Nigerians, who voted for it with the resources from the five per cent that did not vote for it? We are asking for resource control.”

The issue of imbalance in allocation of resources also topped the talk as the speakers recalled that the last National Constitutional Conference recommended the creation of 18 more new states because of their belief that the country should run on six geographical structures based on equity and fair-play.  Ekwueme said it was wrong for the old Kano State to have 72 local governments while Lagos which was the most populated had 24, adding that it was time to go back to regional government as bargained by our founding leaders.

Evangelist Ukoh, said the theme of the annual convention entitled “Still in search of true federalism”, pointing out that the strategy to make majority of the people to remain silent without conversation will not work.       Ukoh reiterated the need for the present government at the centre to implement the recommendations of the last national conference.

The Leader of Movement for Actualization for Sovereign State of Biafra (MASSOB), Comrade Uchenna Madu, who received an award on behalf of the detained Radio Biafra Director, Nnamdi Kanu, was however pessimistic on true federalism when he said “there is nothing like true federalism in Nigeria even in the next hundred years.

“For the people who believe in Nigeria, they will not find it because the way Nigeria is being structured by the colonial master favours the north and dis-favours the south and with the religion and tribal sentiments and differences in culture, the ethnic nationalities that were yoked together to form geographical expression call Nigeria can-never live together as there is a complete lost of mutual understanding among the various ethnic nationalities. The foundation of Nigeria is faulty”, the Separatist leader concluded.

Truly, the gathering of Igbo youths in the Coal City was a huge success as the audience actually had the opportunity to learn from  their leaders and elders who had excelled in different fields.

What does Sheriff want?

APC: The morning after convention