What does Sheriff want? 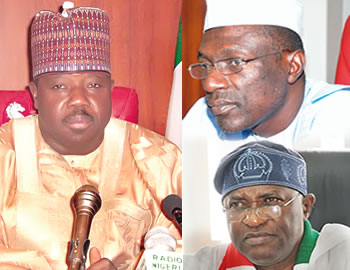 LEON USIGBE reflects on the question on the lips of many Peoples Democratic Party (PDP) as the ongoing leadership crisis threatens to rip it to shreds.

It was plain sailing for Senator Ali Modu Sheriff as the national chairman of the Peoples Democratic Party (PDP) until that cancerous disease afflicting many political leaders, the sit-tight syndrome, sank its lethal  tentacles down the marrow of the party’s bones. The former ruling party, desirous of a father-figure to restore its confidence, self-belief and inspire its followers, ignored its core membership, some of them very competent, and approached the former Borno State governor, considered an outsider. Despite what was alleged to be his baggage, he was  installed as the party boss. Now, its disease has become full blown and the attempt to heal the party is proving to be cutting off the malignant tumor with the flesh. PDP is quaking.

The party stakeholders, particularly its state governors engineered the takeover of the leadership by Sheriff amid stiff opposition by vocal members of its Board of Trustees (BoT) and an internal pressure group made up mainly of former ministers in the party. Perhaps, they were convinced by his deep pockets which could come handy at a time the PDP no longer enjoyed federal funds. They also believed in his perceived strength of character which enabled him to tell off his former party, the All Progressives Congress (APC), after helping to form it.

Beyond this was the fact that being a Muslim of Kanuri stock, he was thought to be the only Northerner who could tackle President Muhammadu Buhari, a fellow Northern Muslim at a time most political and opinion leaders from the region have gone completely mute, in the estimation of many party leaders, not minding features of lack of capacity prominent in the the Daura-born politician’s attitude to governance.

The two groups opposed to Sheriff coalesced into that Concerned PDP Stakeholders, vowing nothing to do with Sheriff. But the governors did not budge except to guide the National Executive Committee (NEC) to put a deadline to Sheriff’s stay in office during which he would organise a national convention to elect new national leaders. While working towards that deadline on the one hand, the governors on the other, goaded the zoning committee set up by the party to re-zone the office of the national chairman to Sheriff’s backyard, the North-East, essentially throwing the post back on his laps. It was too much for the concerned stakeholders to bear. If they had faulted Sheriff’s choice as the stop-gap chairman of the party, the attempt to give him three more years through the national convention was to them, adding insult to injury.

Sheriff obviously gave his blessing to the court process realising that his benefactors, the state governors had turned against him over his perceived presidential ambition. That was the situation. It was no longer just the concerned stakeholders who wanted to see the back of Sheriff but their interest had now collided with that of the governors. Sheriff had become an orphan left in the cold. But he must now do all that was within his powers to survive. He launched a fight back.

Relying on the Lagos court order barring the conduct of elections into three national offices, he announced the cancellation of the entire convention which had been organised by a resolution of NEC. But out of the lure for power observers believe, he gave no thought to what would become of the party leadership since his tenure, going by the resolution of NEC, the party’s highest decision-making body, expired on May 21, the day of the convention. The only way he could have remained in office was for him to be elected in that convention or have his tenure extended by NEC. Neither of these happened. Instead, in obedience to the court order, the convention did not conduct any election but relied on its constitutional powers to dissolve the national leadership and set up a caretaker committee. On what ground does Sheriff now claim the party’s top post? That is a question he has not been able to coherently answer.

Party faithful are asking: what does Sheriff want? They ask this because PDP has had national chairmen who left when asked to before their tenures were up. Bamanga Tukur and Adamu Mu’azu whose term he was supposed to serve out, left when requested. Why is he different?Why is effort to get him to quit pulling the house asunder?  Why is he insistent on the post if he has not got a hidden agenda? PDP supporters want answer as the haemorrhage unleashed on their party by the sit-tight disease is becoming increasingly unbearable. But Sheriff is not moved. He believes his tenure ends in 2018 unless a court of competent jurisdiction decides otherwise.

God will not come down