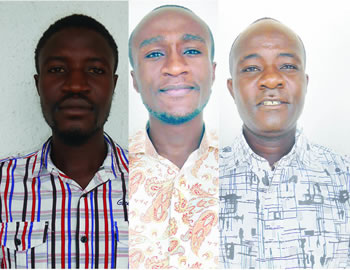 TRAVELLING to Iseyin, Oyo State for his literary residency has given a writer of Northern extraction, Abdullahi Lawan Kangala, the opportunity to experience another culture other than his own.

Kangala, who writes in Hausa language, was one of the three writers who just completed their residency at the Ebedi International Writers Residency in Iseyin.

Speaking on his stay at Ebedi, Kangala, who is the first Hausa writer in the indigenous language to attend the residency, said he hoped to put some of his experience in his writings so that his readers can know more about the people of the town.

“I am really glad that I came to Ebedi for my residency, and it afforded me the opportunity to complete my novel, as well as some short stories,” Kangala said.

On how he got to know about the residency, Kangala, who is from Kano State, said the Association of Nigerian Authors (ANA), Kano State chapter organised an event to celebrate Dr Wale Okediran earlier this year in the city.

“In fact, the event, which was held on Dr Okediran’s birthday, was to honour him for his contributions to literature in the country; it was at this event that I met him, and when he got to know that I write in the Hausa language, he took special interest in me, and he invited me for the residency, saying no indigenous Hausa writer had ever applied to come for the residency.

“I am glad that I took the opportunity, and apart from the fact that I was able to complete some of my literary works, I was also able to experience a different culture in Iseyin.

“The people of Iseyin are nice, and when they know one is a stranger, they do everything to make one feel comfortable.

One his relationship with the students that writers mentor, Kangala said, “I am happy that I was able to teach them some Hausa words, as well as songs.

“The students were so lively, and that made my work easier.

“It was really a great experience coming for this residency, as I was also able to meet fellow writers from other parts of the country,” Kangala said.

The second resident, Okwudili Nebeolisa, a graduate of the Federal University of Technology, Minna, Niger State, admitted that if a writer cannot work at Ebedi, then he cannot work anywhere else.

“This is because the environment is so serene. I must commend the founder of the residency, Dr Okediran, for the good work he is doing for literature in the country.

“He is redefining literature in the country with this residency, and one good thing is that writers from other African countries also make use of the facilities at Ebedi for their literary works.

“This is, therefore, the first international writers’ residency in the country, and it is a good thing for Nigerian literature,” Nebeolisa said.

During his stay at the residency, the Federal University of Technology, Minna graduate was able to write several poems and short stories.

“In fact, most of my poems dwell on Iseyin, as I summarised my experience in the town.

“On my relationship with the students, we organised an event for them on Children’s Day, where they displayed their talents. They recited poems, had drama presentations, among others.

“So, it was six weeks filled with fun at Ebedi, and I hope to seize the chance to attend the residency again in the nearest future,” Nebeolisa said.

While speaking, the administrative manager of the residency, Mr Macdell Joshua Kofi Sackey, said the management would continue to encourage Nigerian and African writers to visit the residency, as it is a way of also projecting Iseyin town.

“Apart from how we assist writers in having a serene environment to complete their works, Iseyin town has also benefited as many people now know where the town is on the Nigerian map.

“Recently, Nobel laureate, Professor Wole Soyinka, realised the good we are doing in promoting literature in the country, and he visited the residency.

“Before his visit, he had not stepped foot in Iseyin for more than 30 years.

“This shows you how important Ebedi is to the literary development of the country.

“We will continue to do our best towards providing the conducive environment for writers to do their work,” Sackey, an award-winning poet who had also attended Ebedi on two separate occasions before being appointed as the manager, said.

Workers’ strike at the threshold of Ondo guber poll