Workers’ strike at the threshold of Ondo guber poll 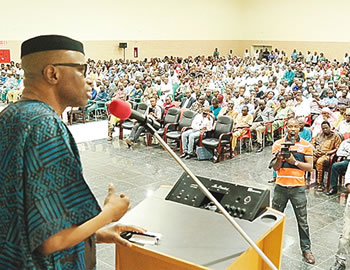 Ondo State workers have been on an indefinite strike for four weeks over the non- payment of their six months’ salary by the state government. HAKEEM GBADAMOSI looks at the workers’ struggle and its implication for this year’s governorship election in the state.

THe industrial action embarked upon by the organised labour in Ondo State on June 1 this year over the non-payment of their salary remains the longest in the history of the present administration in the state. The workers had rejected all entreaties from stakeholders to go back to work before negotiating with the state government on the modalities to pay the salaries.

Though the workers appeared to understand the economic hardship being experienced across the country, they expressed disappointment over the government’s insistence on paying just one month’s salaries out of the six months owed. The strike has since paralysed all activities in the state establishments, as workers complied with the directives of their leadership. Activities at the Alagbaka Government secretariat have been paralysed since the commencement of the strike, with the leadership of the workers’ union insisting that “the strike would not be called off until government does the needful.”

Not even the intervention of royal fathers yielded positive result, as the workers stuck to their guns, even after meeting with the leadership and members of the state House of Assembly where they urged the lawmakers to prevail on the state government to put a halt to all capital projects until the salary issue was resolved.

Amid the strike, Governor Olusegun Mimiko travelled to the United Kingdom where he was invited to speak at a session on “Health Care for all: From Aspiration to Implementation,” at Chatham House. The trip however drew the ire of the opposition party in the state, the All Progressives Congress (APC), which, in a statement by its publicity director, Steve Otaloro, alleged that the governor was not sensitive to the plight of the people.

However, the Peoples Democratic Party (PDP) in the state, through its publicity director,  Ayo Fadaka, was quick to react to the opposition’s claim. He said that the statement of the APC demonstrated that the party lacked an understanding of the workings of government. It explained that the fact that the governor embarked on a working visit did not indicate that the apparatus of governance equally took a walk.

Upon returning from the trip, the governor met with the striking workers from Grade level 1- 17, and appealed to them to sheathe the swords.  He took the pain to explain the situation of things to them but, alas, they maintained their stand.  Mimiko noted that the strike had cost the state millions of Naira which the state would have generated through Internally Generated Revenue (IGR). He said: “We have lost over 40 per cent of our monthly IGR to the strike. I feel the pain, our hospitals are shut and many accident victims would have died as a result of this strike. I want  you to bear with me at this period, I can never take your welfare for granted. We are ready to have creative dialogue with you. I appeal to you to back to work.”

He explained that the state had N3.4 billion in its coffers currently, out of which 2.7 billion had been earmarked to pay one month’s salary of local government workers and primary school teachers, while the remaining N700 million would offset the salaries of health workers for one month. He recalled how the government had augmented salaries, until it could no longer do so as a result of the reduction in monthly allocation and IGR.

Though some analysts insinuated political undertones in the position of the striking workers, the leadership of their union had stated before the commencement of that  it would not allow politicians or parties to hijack the strike from them to elicit their support.

While some political watchers are of the opinion that the strike could have some implications on the chances of the ruling PDP in the state in the November governorship election, others claimed that it might not determine where the pendulum would swing. They argued that the present economic hardship resulting in the non-payment of salaries was not peculiar to Ondo, noting that many APC states were experiencing a similar challenge if not worse, situations.

Some of the workers blamed the present economic hardship on the APC administration at the centre, saying the it was  bereft of ideas on how to turn the country around with their change promise. According to them, governance is not all about fighting corruption alone but making life comfortable for the common people.  A worker who spoke on condition of anonymity told the Nigerian Tribune: “I sympathise with the PDP-led government in the state. The government is worker-friendly: we had been receiving salaries without any hitch until recently and the government had even been paying us the 13th month salary at the end of every year.”

The leaders of the workers, at meeting with the leadership of the State House of Assembly, also affirmed their support for Mimiko’s government and the role played by the union towards the election of Mimiko as governor. They however threatened to withdraw their support if the government failed to look into their plight. This might be one of the reasons the Speaker of the Assembly, Rt Hon. Jumoke Akindele, said: “We also acknowledge the strength you have to change things in this state.  This government is your baby and the pillar upon which it is erected. We understand  and feel your pains.”

Political pundits however said that the PDP-led government still has the time to worm itself back into the hearts of the workers. They opined that the workers,  if the administration is able to settle the wages of the workers to extent.

According to an analyst, “PDP will bounce back; they still hold the aces against all odds, the seemingly silence from the PDP camp is caused by the inability of the state government to pay workers salary but I am sure immediately a compromise is reached, the change of  tide will surprise the opposition.”

But will the PDP curtail the rising popularity of the APC in the state, considering the day by day mobilisation  by the leaders and members of the party across the state? The  popularity was said to be responsible for the large number of aspirants jostling for the party’s ticket. However, if the ongoing negotiation between the workers and the state government sails through, APC might need to go back to the drawing board to re-strategise. Only  time will tell the political future of the state.

Government must be run like efficient company —Gov aspirant