A review of Ezekiel Fajenyo’s The Writings of May Ifeoma Nwoye: A Critical Literary Analysis by Paul Liam. 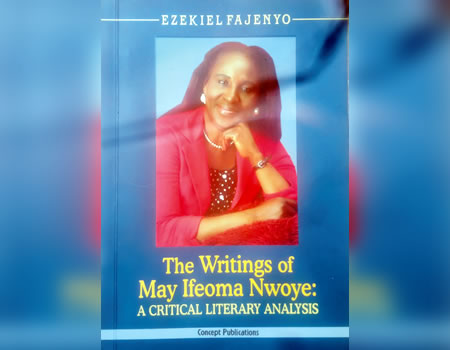 Ezekiel Fajenyo’s exploits in the field of literary criticism and scholarship has rightly established him as one of the few hard-working critics engaging through critical studies in Nigerian literature today. With several critical titles to his name, Fajenyo’s reputation as an important critic in Nigerian literature is not in doubt, thus his exploration of the issues and ideologies of the writings of one of Nigeria’s famous female writers, May Ifeoma Nwoye, further concretises his unsung reputation.

Fajenyo’s critical analysis of Nwoye’s writings is an instructive incursion that exposes the leitmotif of her artistic expressions and provides a profound context for anyone interested in reading or researching into the works of that formidable author. The 588-page book begins with a biographical sketch, in chapter one subtitled ‘General Introduction’ where he X

-rays the history of her birth, education and scholarship, as well as her glorious attainments in life. May Ifeoma Nwoye, a distinguished accountant and academic has perhaps published more works of creative fiction than many of her contemporaries. Trained professionally as an accountant, her love for creative writing has earned for her a reputation that her career as an accountant has failed to accord her, and this fact is succinctly reflected in the book.

Fajenyo, after executing what can be described as a mini-biography of the author and establishing in summary the crux of her art, shifts attention in chapter two to her first novel, Endless Search, which is also the title of the chapter. Here, Fajenyo provides an in-depth analysis of the various themes and social issues in the novel; principally he draws attention to the politics and social construct of marriage in African societies.

Nwoye’s writings by the author’s position is an aggregation of a conscientious inquisition into the nature of human relationships and the underlying constrictions of the society. The author, through this critical analysis, deconstructs, as well as establishes the link between literature and the larger human society, via the writings of Nwoye. This supposition can be deduced in chapter three: ‘Tides of Life’ which is also one of Nwoye’s titles. According to Fajenyo: “Nwoye’s satire is energised by the commonplaceness of the events which she writes about.”

The reader of Fajenyo’s book is bound to be exposed to the doses of Nwoye’s philosophic and social commitment as a writer, plus the author’s interpretations of what these representations mean for the larger society. The book is chiefly an analysis of the styles and themes of Nwoye’s works in their various shades and their implications for the human society.

Fajenyo attempts to locate Nwoye’s narratives within the larger  marxist pontification of literature as being capable of rendering concrete services to the society. What is also referred to as social consciousness. In other words, Fajenyo perceives Nwoye’s writings as having fundamental social functions.

In chapter nine, ‘Oil Cemetery,’ Fajenyo unmasks through a detailed analysis the oil politics, environmental degradation and strife brought upon the people of the Niger Delta as a result of the exploration of oil in the region as reflected in the Oil Cemetery which constitutes also the concern of the chapter.

In chapter ten, Fajenyo presents an interview with the writer and in it the reader encounters from the horse’s mouth what informed her journey into writing.

A journalist recounts his life after retirement