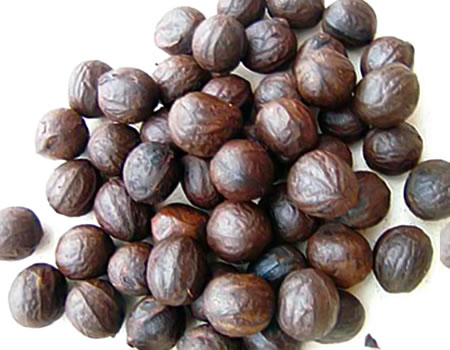 Living with fibroids often means living with pain and anxiety. It makes sense to explore ways that might prevent this condition or at least lessen its symptoms. While there is little medical data that supports food-shrinking fibroids, there is evidence that African walnut (Tetracarpidium conophorum) leaves can help treat fibroid.

In a new study, researchers evaluated the therapeutic effects of African walnut leaves extract on the growth of uterine fibroid in rats under laboratory conditions. They found it mitigated the effects of the induced fibroid in the test animals.

According to the study, the administration of African walnut leaves extract at 200mg/kg body weight could serve as a potent, inexpensive, and effective remedy for uterine fibroid treatment and may offer possible alternatives to surgery.

Fibroids are almost always benign (not cancerous). Not all women with fibroids have symptoms. Women who do have symptoms often find fibroids hard to live with. Some have painful and heavy menstrual bleeding.

Fibroids also can put pressure on the bladder, causing frequent urination, or the rectum, causing rectal pressure. Should the fibroids get very large, they can cause the abdomen to enlarge, making a woman look pregnant.

About 20 percent to 80 percent of women develop fibroids by the time they reach age 50. Fibroids are most common in women in their 40s and early 50s. Basically, age, having a family member with fibroids, being African, overweight or eating a lot of red meat can increase a woman’s risk of developing fibroids.

In folk medicine, boiled seeds of African walnut are eaten to improve sperm count in men, while the leaf juice is used to improve fertility in women and regulate menstrual flow. They are also used for treatment of thrush, worm infestation and as an antidote against snake bites. The bark is brewed as a tea for use as a laxative and is chewed for toothache. The fruits are also edible.

For the study, uterine fibroid was induced by oral administration of diethylstilbestrol (DES) and intramuscular injection of progesterone in rat models. Sixty-four female Wistar rats were used for the study. The rats were randomly divided into eight groups of eight animals each.

The results showed pretreatment and post treatment with the extract at 200mg/kg body weight mitigated the effects that have been induced by DES and progesterone. The study was carried out by Oyinloye Esther Yetunde at Kwara State University.

In the 2017 Journal of Advances in Medicine and Medical Research, researchers said ginger has fibroid-preventing and fibroid-reducing properties at the level of the pituitary gland and the results of this study may contribute greatly to knowledge and may offer a non-invasive therapy for treating women with fibroids.

Diet choices alone can’t prevent or treat fibroids, but research suggests the foods we eat may influence fibroid risk and growth. According to researchers, staying at a healthy weight by eating a balanced diet that includes plenty of fresh fruits, vegetables, lean proteins and healthy fats can be helpful to decrease or prevent fibroid growth. Citrus fruits like grapefruit and oranges are among the most important plants for fibroid prevention.

For instance, a 2011 study from The American Journal of Clinical Nutrition noted that people who ate three or more servings of citrus per week were significantly less likely to have uterine fibroid compared to people who ate citrus less than once a month.

But of course, an August 2013 study from the International Journal of Women’s Health reported that daily supplementation with green tea extract significantly reduced the size of study participants’ uterine fibroids.

Looking at the Best Nigerian Musicians Throughout Time