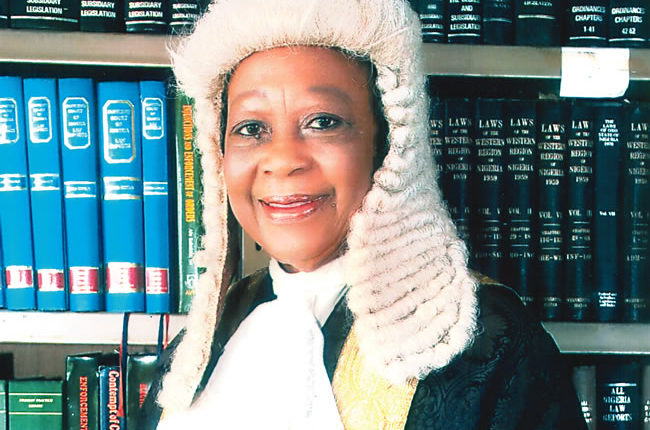 At the Memorial Special Court Session in Honour of Mr Emmanuel Abiodun Esq at the High Court No. 1 on Tuesday the 9th day of February 2021.

I thank the Hon. Justice M.L. Abimbola, the Chief Judge of Oyo State for the gracious invitation extended to me to attend and deliver a Speech at this sad Memorial Special Court Session in honour of our beloved learned friend — Mr. Emmanuel Abiodun Esq. He passed away most tragically on Wednesday the 23rd day of December 2020. His death was inexpedient. My Speech is titled: A Lamentation.

I am constrained to confess that, of all the High Court Session Addresses I have delivered since I was decorated with the prestigious rank of Senior Advocate of Nigeria forty (40) years ago “id est”: on the 5th day of March 1981, today’s Lamentation is the most excruciating for me. Thus, unlike William Shakespeare, I have not come to bury Emmanuel Abiodun not to praise him, rather I have come to praise him not to bury him, because he will forever remain with us in the annals of the legal history of Nigeria as a most learned, brilliant, respected, respectable, reputable and, above all, despite all the problems of corruption that plague and torment us now, he was a very trustworthy member of our one and only learned profession.

I have known Mr Abiodun for more than four decades. In fact, the family and professional relationship was so strong that he named his first daughter— Folake Abiodun Esq after me. She is now a legal practitioner in her own right. Praise God. His law-chambers will survive him. “Deo Volente”.

Mr Abiodun’s name appears on my letterhead stationery as a sign of our professional collaboration from time to time.

He applied once for the rank of Senior Advocate of Nigeria and I gave as much support for his application as I could. He did not re-apply after the first attempt failed. He would have been elevated to the rank if he had re-applied again — 72 (seventy-two) lawyers were elevated last year to the prestigious rank. His legal knowledge was prodigious. He certainly deserved his status as a Life Patron of the Nigeria Bar Association (NBA) Ibadan Branch and a former Chairman of the Branch which he served most creditably throughout his life.

During my presidency of Zonta International (1994-1996), and my presidential assignments took me to all continents of the world, I left my Alabukun law-chambers in the control and management of my doctor/lawyer daughter — Dr. Yemisi Koya Esq — and under the supervision of Mr Abiodun Esq. He performed this role superbly. My daughter has a very positive memory of how Mr Abiodun was such an excellent senior who took her to court, introduced her to everyone, monitored and counselled her in the handling of her briefs. My daughter remembers him with respect, fondness and gratitude and mourns his loss. Mr Abiodun was a reliable and dependable leader of the Bar at all times.

Now, on Tuesday the 22nd day of December 2020, Mr Abiodun visited me in my home. He was using a walker. However, I was glad to see him looking much better than he was the last time he visited me. His voice was strong. I told him so, because I knew that he had been having some serious health challenges, but there was remarkable improvement when he came and stayed for about one and a half hours. I saw him to the car at the gate and waved him off. I did not know that I was waving him off forever. Heavens above!

The following day “id est”: on Wednesday the 23rd day of December 2020, he closed in his law chambers in the afternoon and went in his car to buy food for his dog at Alesinloye Market. He told his driver to pack on one side of the dual carriage. He bought the dog food. He was trying to cross the road to his car when a lawless, reckless and dangerous okada rider, speeding against traffic in the opposite direction of a dual carriage road, knocked Mr Abiodun down and killed him at the median of the road.

Oh ye gods! And the criminal fled. What a tragedy, what a disaster, what a colossal loss to his family and staff, the legal profession, the people of Imesi-Ile and Ibadan and the whole country. He would have been 83 on the 1st day of January 2021.

I am still in utter shock and only accepted the Hon. C.J.’s invitation because of my respect for His Lordship and my position as the first female Senior Advocate of Nigeria and a leader of the Bar, and which professional role I treasure greatly. My leadership role is very precious to me, and with all humility, I wear it like a garment. That is why I had to put aside my sorrow and anguish to come here and deliver a Lamentation, not a Speech. I owe it to Mr Abiodun to be present here to celebrate him, even in death.

This national and professional tragedy is a “WAKE-UP” call to and for Nigeria and the legal profession. The present distressing and unacceptable situation is that precious lives are perishing through the lawlessness of Okada (motorcycle) riders and tricycle drivers hereinafter called “operators”.

Being an Okada or tricycle operator is not an easy occupation. Indeed it is dreary and wearisome in the burning sun and in the blowing wind. Many are in this business because there is no other job.

Right now, the operators of these vehicles who are engaged in this labourious business, undoubtedly, render crucial and important service in the transportation sector for the masses, but should not be at the peril of the public.

Regretfully, there is inadequate or no government mass transit service for public transportation e.g buses for the populace. Consequently, as the people have to move from one place to another and only the Okada and tricycle operations are the only available means of movement for many. This is an alarming failure on the part of the government and the affluent corporate employers who should provide transportation for their employees.

Thus, government must now take control and formulate a policy framework to regulate the okada and tricycle operations and define parameters within which the operators can carry on their important business.

Now, the untimely and inexpedient death of Mr Abiodun Esq is a national and professional disaster. The catastrophe is a “WAKE UP” call to and for Nigeria and the legal profession. The country must WAKE UP now and subject the operators of the okada and tricycle vehicles to the culture of road discipline and of due care and diligence. They cannot be law unto themselves. And there are millions of them in the country. The time is now for government’s intervention.

In view of the national tragedy, and with all due respect, relying on my age of 88 years and 58 years at the Bar, I hereby plead with our learned friends of the Silk — His Excellency Professor Yemi Osibajo SAN the Vice President of Nigeria, and Abubakar Malami SAN the learned Attorney General and Minister of Justice to prevail upon His Excellency General Muhammadu Buhari President of the Federal Republic of Nigeria to declare the catastrophic misfortune of carnage on our roads as a national emergency to be proclaimed and implemented nationally by introducing strict remedial regulations by way of legislations to control the operators and curb their excesses. The vehicles constitute present and imminent hazards. Similarly, I also call on the State Governors of Oyo (Mr Seyi Makinde), Osun (Mr Gboyega Oyetola) and Lagos (Mr Babajide Sanwo-Olu), as points of contact for the other state governors, the Attorneys General particularly of Oyo (Professor Oyewole Oyewo SAN), Osun (Mr Femi Akande Esq) and Lagos (Mr Moyosore Onigbanjo SAN) as points of reference for the other State Attorneys-General, Local Government Chairmen, the Inspector General of Police, Olumide Akpata Esq, President of the Nigerian Bar Association, and the NBA Branches throughout Nigeria and the populace to articulate and advocate the following recommendation:

Please, permit me to digress briefly. It is always a matter of great distress and embarrassment for me when I see a female passenger on an okada sitting between a male rider and a male passenger.

The female passenger is exposed to double jeopardy, from heat in front, and heat at the back. It is a physical assault on the female gender. It should not be allowed because it diminishes the female dignity.

Now, back to my Lamentation. The point has to be made that it is not possible to reduce the number of these operators without providing alternative employment. Thus, employment and reduction of the number of vehicles go hand in hand.

In addition to the public officers and other entities hereinbefore, mentioned, I now name local governments, non-governmental organizations (NGOs), religious bodies and educational institutions “et cetera” to join in a serious campaign against the mayhem on our roads. The country has enough problems, particularly, COVID-19, kidnapping, herdsmen violence . . . to contend with without adding the slaughter of people on our roads. Last year, with End SARS agitation it was “E soro soke”, now it is a “Wake Up” call against road carnage and all of us must “soro soke”. For heaven’s sake, enough is enough.

Respectfully, I urge judicial officers to include “obiter dicta” pronouncements in the deadly societal disaster in their judgements.

Again, I salute the Hon. CJ Abimbola and the Judges for attending this Memorial special court session in honour of Lawyer Abiodun one of our best and brightest legal stars. I salute the members of the Abiodun.

Jangebe abduction will be the last — Buhari