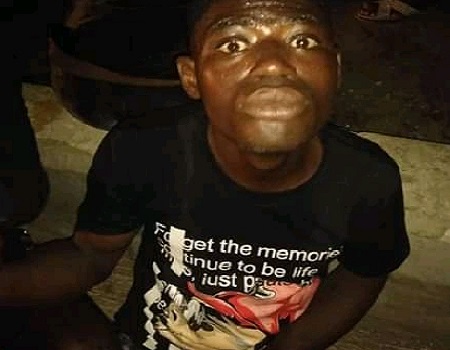 A 19- year-old has been arrested by the police in Lagos State during a foiled operation by a two-man gang in the Oshodi area of Lagos State.

The suspect Mayowa Adedoyin was around 9 o’clock on Saturday night attempting to rob a man around Oshodi Oke when operatives of the Rapid Response Squad (RRS) swooped on them.

The teenager was arrested, while the other member of his gang escaped with the gang’ s weapon, which they were about using on the victim of the botched robbery.

A source at the RRS, who confirmed the arrest of the suspected armed robber to Tribune Online, said that the policemen were on their way to Oshodi Oke, when they intercepted the armed robbers.

The police source said “yes, we arrested a suspect in the Oshodi area. They were attacking a man with the intention of robbing him.”

“Our riders, who were deployed to Oshodi Oke area to Anthony and neighbouring communities sighted them and quickly moved to the scene.

The image maker in charge of the state police command, Bala Elkana confirmed the arrest of the teenager to the Tribune Online and added that the police were on the trail of the other members of the gang.

The Lagos police image maker also warned other criminals in other parts of the state to retrace their steps or be ready to face the full wrath of the law.