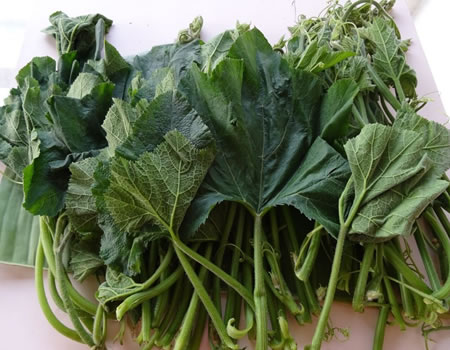 Often, mothers are worried that malaria leaves their children restless, tired or even with low blood levels. Studies have shown that excessive destruction of red blood cells during a bout of malaria and even during treatment causes mild to severe anaemia, a situation which makes recuperation from malaria even more difficult and stressful on the patient.

Now, experts have recommended intake of the water extract of ‘ugwu’ or fluted pumpkin during a bout of malaria to reduce the tiredness that occurs from low blood level due to mild to severe anaemia, a consequence of malaria. Low blood level due to malaria makes recuperation from malaria even more difficult and stressful on the individual.

Several studies carried out on Telfairia occidentalis, which is commonly known as fluted pumpkin or ‘ugwu’, have proven that a diet containing ‘ugwu’ extract can significantly improve blood levels by boosting the packed cell volume (PCV).

In a study to evaluate the effect of water extract of ‘ugwu’ leaf on PCV in rats with malaria-induced anaemia, researchers found that its leaf extract caused a 22 per cent increase in PCV under laboratory conditions.

Thirty-five Winstar albino rats were used as animal models in this study. The rats were divided into seven groups, each group comprising of five rats. Groups 1, 2 and 3 served as the negative control, positive control and experimental group, respectively, while the other four groups served as dosage group.

At the onset of the study, the PCV of all groups were measured and recorded. All groups were then inoculated with Plasmodium berghei and the parasite was allowed to fully develop in the hosts before commencing measurement of their PCV again at intervals of 24 hours.

Two milligrammes per kilogramme body weight artesunate was dissolved in distilled water and administered to groups 2 and 3 followed by the administration of 200 mg/kg ‘ugwu’ extract only to the experimental group over a five-day period. The aqueous extract doses administered were 100, 200, 300, and 400 mg/kg to the groups, respectively. All groups were monitored closely and their PCVs determined.

The researchers said that the high level of iron in the extract is indicative of its potential ability to boost iron levels in the experimental subjects and hence red blood cell production in animal subjects with malaria-induced anaemia.

According to them, “The results of this study indicate that the aqueous extracts of the leaves of T. occidentalis may boost RBCs production during infection with Plasmodium. This suggests that the water extracts of the leaf possesses haematinic (blood-building) properties, which are potent in boosting and enhancing PCV of a rat with malaria-induced anaemia.”

Previously, researchers had stated that the incorporation of ‘ugwu’ in infant weaning foods had significant effects on iron status indices. Also, anaemic pregnant women served the mixture of ‘ugwu’ with milk and eggs, or even ‘ugwu’ extract sweetened with milk had experienced a significant rise in their average PCV.

In addition, the leaves extract of ‘ugwu’ is believed to have beneficial health effects and is used in tradomedical preparations.  The study suggests that ‘ugwu’ helps to stabilise normal and sickled red blood cell membrane, making it also beneficial for persons with sickle cell disease.