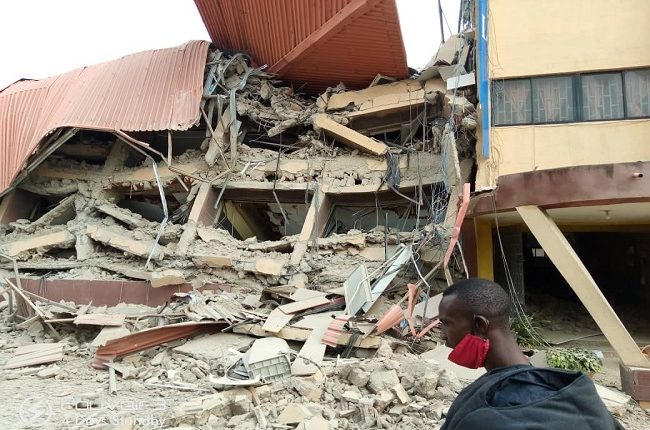 Share
A three-storey building belonging to ‎Excel College, ‎a private secondary school in Ejigbo area of Lagos State, collapsed on Saturday.‎
The building, located at 15, Ansarudeen Street, Ile-Epo Bus-Stop, collapsed at about 8.15 am.
The heads of public affairs of the state’s Ministry of Education, Mr Kayode Abayomi, and that of the state’s emergency management agency(LASEMA), Mr Nosa Okunboh, were both confirmed the incident to Nigerian Tribune on phone.
They said there was no casualty recorded as the school is still on holiday.
They also said the school building had been shown sign of distress before it went down on Saturday.
Mr Okunboh noted that the state’s Commissioner for Physical Planning and  Urban Development, Dr Idris Salako, had already visited the site.

A fuel tanker has exploded at Anthony inward Gbagada, Lagos State. This happened as a result of the tanker losing control while on motion and fell sideways thereby leading to an explosion and got two unidentified vehicles burnt…School building collapses

The Lagos State government on Friday announced that it will close the popular Ojota interchange up to the second bridge in the area for three months beginning from Monday, September 21, for some repairs…School building collapses

Hundreds of followers of the Speaker of the House of Representatives, Hon. Femi Gbajabiamila have continued to react to the twitter message on his official twitter handle: @femigbaja, on his engagement with his counterparts from Ethiopia, Ghana, Kenya, Senegal and South Africa on the planned collaboration in the joint task of loosening the stranglehold of foreign debt on our economies, ahead of the 2021 conference of African Speakers, scheduled to hold in Abuja…School building collapses  School building collapses