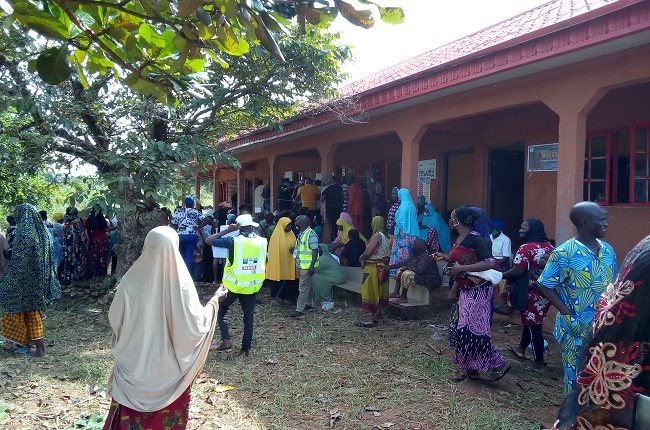 As voters in Edo State turned out on Saturday to elect a new governor, the exercise was marred by low turnout of voters and vote-buying in most of the voting centres visited by Sunday Tribune. This was just as the COVI-19 protocol of social distancing took the backstage as the protocol was abandoned.

At Emokpae Model Primary School, Oredo ward 4, where Governor Godwin Obaseki of the Peoples Democratic Party (PDP) voted, the turnout was not impressive with the number of 10 voting units at the centre.

Governor Obaseki who arrived at the centre at 10.22 am and joined the queue for accreditation and later voted at about one and half hours later the number of voters who turned up for the 10 voting units at the centre was scanty, compared to previous elections at the same centre.

The scanty number of voters notwithstanding, while the exercise was relatively peaceful, heavy vote-buying at the Hausa community at Nevis Street and Holy Cross Cathedral on Mission Road, where. prospective voters were given N2,000 and 4 packs of noodle, went on with impunity.

Some youths resisted the move and chased away the vote buyers, who later resurfaced and continued with the illegal acts while the security agents on duty could not do anything.

At ward 7, Ikpoba-Okaha Local Government Area, where there were 25 polling units at Ologbosere Primary School, Ugbekun, the turnout too remained unimpressive.

Though the voters were calm and orderly, recorded a massive turnout of voters. Elifel Plaza, opposite the primary school, was the centre for vote-buying with huge patronage from the voters, especially women.

Ward 7, Oredo LGA with 25 polling units, at Igbesamwan Model Primary School was unexpectedly calm as voters performed their civic duty, peacefully. The ward voting centre has always been a flashpoint of crisis in previous elections.

For a 25-unit voting centre, the turnout was not that impressive. But vote buying went on unhindered at the centre.

Tribune Online recorded that voting started late at the centre as voting materials did not arrive until 9.38 am

Captain Okunbor Idahosa who arrived the centre at 11.55 am, sought and obtained the permission of the people to be accredited immediately and he voted at 11.58 am.

Speaking after casting his vote, Idahosa expressed happiness at the level of peace and tranquillity at the ward.

At the same centre, the House of Representatives member, Omorege Ogbeide Ihama, representing Oredo Federal Constituency also voted at Oreo Ward 2 and expressed happiness over the peaceful nature of the election.

All Progressive Congress, APC, Pastor Osagie Ize-Iyamu, who voted, at Ugboko ward 4, unit 26, Orhionmwon Local Government Council of the state at about 9: 25 am. expresses the optimism of winning the election.

Ize-Iyamu joined the queue at his polling unit located at Iguododo Primary school at about 9:20 am before casting his vote at about 9: 25am.

Speaking to journalists after exercising his franchise, Ize-Iyamu commended the Independent National Electoral Commission (INEC) for peaceful conduct of the electoral process and for adhering to the COVID-19 protocol.

“The process is good and going on smoothly; there is no thuggery and violence, the place is peaceful and calm. I am happy that INEC has a thermometer to check the temperature and they also give out face masks to our people. “We encourage our people to come out in batches so they can strictly adhere to the Covid-19 protocols of social distances”, he said.

Accreditation and voting commenced simultaneously at Ugboko ward 5, unit 26 at about 8: 46 am amidst the presence of security personnel.

Unlike in other areas, turnout was remarkably low, a situation which an upbeat Shaibu attributed to the series of violence in the run-up to the governorship election.

Speaking with journalists shortly after casting his vote, Shaibu commended the exercise, noting that it was a good thing that it turned to be peaceful as against the initial prediction of violence.

The PDP deputy governorship candidate enthused: “We will win. I am very optimistic of victory. As you can see, the election is very peaceful. There is no single cause of violence here.”

Accreditation and voting started early and voters are were seen lining up to vote amidst light security mounted by a combined team of security personnel.

The presiding officer explained that accreditation of eligible voters who queued up peacefully started on at 8 am.

A community leader, Momoh Abdullahi commended the exercise, noting that there is no problem and is optimistic of a violence-free election.

The Edo State Governor and candidate of the Peoples Democratic Party (PDP), Mr Godwin Obaseki has expressed disappointment over the failure of card readers in several wards across the state.

Obaseki who spoke to journalists shortly after casting his vote on Saturday, in Oredo Local Government Area of the state, noted that after spending several hours on the queue due to card reader issues, the failure of the card readers shows the unpreparedness of the Independent National Electoral Commission (INEC).

According to the governor, “I expected better preparation on the part of those saddled with the responsibility to conduct this election. To wait for one and a half hour on the queue before exercising my franchise is a bit disappointing.

“Given that this is a sole day’s election, I expected better planning and preparation and resources should have been put into this election.

“At the last presidential election, in my polling unit, there were two polling points which eased the burden on voters. You all are witnesses to how long it has taken.

“The card reader here is working slowly, and this is the situation in all the major voting centres in Oredo Local Government Area of the state as I speak.

“At Garrick Memorial School, I understand that over 500 voters are already stranded because they can’t vote due to the slow processing of the card reader.

“One would have expected that INEC will have deployed more card readers and more voting points in high-density polling centres,” he said.

Responding to the issue of vote-buying at polling units, the governor said that the security agencies are not doing what they assured Edo people and Nigerians before the election.

“The security agencies assured us that they won’t allow anybody who doesn’t have a business of voting, into a particular place, but they are working contrary to what they promised us.

“You can see cars parked with a lot of cash being disbursed to people buying votes, and it seems to be normal practice, but we are not perturbed as people know what to do. Cash can’t buy their future,” Obaseki noted.

A fuel tanker has exploded at Anthony inward Gbagada, Lagos State. This happened as a result of the tanker losing control while on motion and fell sideways thereby leading to an explosion and got two unidentified vehicles burnt…EdoDecides 2020 EdoDecides2020 EdoDecides2020

The Lagos State government on Friday announced that it will close the popular Ojota interchange up to the second bridge in the area for three months beginning from Monday, September 21, for some repairs…EdoDecides2020  EdoDecides2020    EdoDecides2020