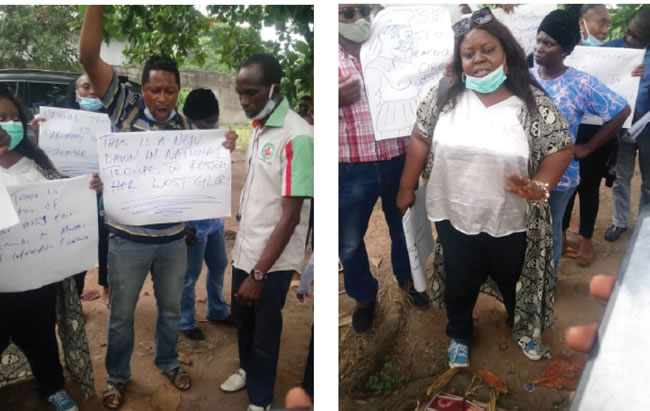 The artistes’ union of the National Troupe of Nigeria loudly celebrated the exit of their Artistic Director, who allegedly abused his position.

It resembled a celebratory scene from a play, especially as the dramatis personae were staff members of the National Troupe of Nigeria, the country’s foremost performance outfit. It was, however, not a scene from a play but an actual celebration, a typical ‘Owambe’ as the Radio, Television, Theatre & Arts Workers Union of Nigeria (RATTAWU) celebrated the departure of the immediate past Artistic Director of the Troupe, Tar Ukoh on Monday, April 12.

The union members and Ukoh had a frosty relationship. There was no love lost between them, and the consensus among players in the industry is that the NTN plumbed the lowest depths under Ukoh, who spent his term running the Troupe from Abuja. Besides, the Troupe produced no production during his watch, unlike what existed under his illustrious predecessors, Professor Ahmed Yerima, Martin Adaji, and even Akin Adejuwon.

So, music and drinks were in abundance as the union members celebrated rapturously. It was, for them, a long-expected exit as the placards they carried indicated. ‘Bye to peacock orchestra’, ‘Tar Ukoh, bye-bye’, ‘National Troupe in jubilation of Tar Ukoh’s exit. Thanks to Minister of Information’, read some of the placards as people danced and made merry.

Some artistes, who couldn’t express their creativity under Ukoh because there were no productions, entertained their colleagues with eye-popping moves as they rejoiced.

Explaining the reason for the jubilation, the union chair, Israel Olugbadehan, said members were glad to see the end of the Ukoh and believe that the NTN would rise again like the phoenix under a new helmsperson.

He said: “We are thanking God because we believe that after Tar Ukoh’s exit, the National Troupe will rise again. We have competent hands, tested professionals who have been with the Troupe since its formation that government can safely entrust the administration to. We have people like Mike Anyanwu, Bisi Ayodele, Shaibu Husseini and even Emmanuel Adejumo that can head the troupe, so government should look inwards, but what we are doing today is not celebrating a sent forth; we are celebrating the downfall. We are celebrating because he leaves. We are not crying that they took a good man from us; we are happy that they took him. Now, we believe that the new National troupe has come.

“Before he became Artistic Director, we used to travel to the US, Cairo, and Ethiopia, almost everywhere in the world, for performances during their national festival. We travel for sports during the World Cup and African Cup of Nations because our artists represent Nigeria. We always perform at presidential inaugurations, but there was nothing during Tar Ukoh’s tenure.”

Olugbadehan further noted that Ukoh also lacked a vision for the Troupe because he wasn’t steeped in Nigerian culture and the body’s rich history. The Union leader explained that the Troupe lost all its lustre under the former leader.

“The major cause of the lost glory is because Tar Ukoh is not an artiste. He is a costumier. He wasn’t good for the National Troupe as he didn’t know the real culture of Nigeria.”

On the way forward for the Troupe, Olugbadehan prayed for a real theatre professional as a new Artistic Director and affirmed the union’s readiness to work with the new management.

“We are always sad that we are collecting salary without any performance because we derive more joy in our work than the pay. The only way forward is for government to allow our directors to take over and for the next three to four years, they should not bring any politician. We are the real ambassador of culture in Nigeria. We carry culture in drama, music and dance to the world to represent Nigeria. They should bring a real theatre artist that knows about this job, someone that knows music, drama and dances of Nigeria.”

Also speaking, one of the artists, Sobifa Dokubo, described Ukoh’s years as a waste. He expressed happiness that the government didn’t give him another term because it would have meant internment for the Troupe.

He said, “recalling the wasted years Tar Ukoh spent with the National Troupe is like relieving a painful and dreadful dream that you don’t want to be repeated. We were all pioneers of the National Troupe under the late Chief Hubert Ogunde in Ososa in 1989/90. He came in and could not withstand 10 days of Ogunde’s training. He abandoned the Troupe, but his next appearance was as the head of an institution he abandoned.”

Dokubo added that Ukoh was not a team player, was dictatorial and abusive. Like Olugbadehan, he also called for a technocrat as the new chief executive of the Troupe.

“The government should look beyond politicians and put a technocrat in place in the mould of Ogunde, Bayo Oduneye, Professor Ahmed Yerima and Martins Adaji. The National Troupe is a beacon of artistic excellence in the most populous black nation on earth.”

Efforts to reach Ukoh for his side of the story failed as his number didn’t go through.

Recall that even before the expiration of Ukoh’s term, a coalition of cultural workers and art patrons called Nigerian Artistes United (NAU) had accused him of alleged abuse of office and financial impropriety. It petitioned the Governing Board of the Troupe to ask anti-graft agencies to probe him.

Resume in order to…

How I survived during COVID-19 —Ade Bantu