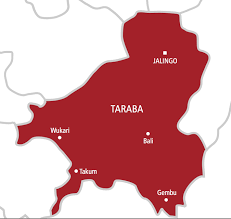 No fewer than three people have been confirmed missing while others were rescued when a boat capsized in River Benue, across the Ibi local government area of Taraba State.

Hon. Bala Bako, the Caretaker Committee Chairman of the local government confirmed the incident to our correspondent on Tuesday during a phone chat.

According to him, the capsized boat was loaded with passengers from Ibi to Sarkin Kudu market when the incident occurred.

“The incident happened while taking off from the coast. The boat engine went off and in the process of restarting, the boat hit a building at the bank area and it broke into pieces.

“Other passengers have been rescued but a woman and 2 children are yet to be seen.

“We are making efforts for life jackets to be provided for use in every boat to safeguard people’s life and a passenger manifest will also be put in place to know the people crossing the river against future occurrence” The council boss confirmed.

The National Industrial Court of Nigeria (NICN), on Monday, adjourned the suit brought before it by the Federal Government challenging the ongoing strike action by the Academic Staff Union of Universities (ASUU) till September 16, 2022 for further mention…

FLIGHT operations at the Mallam Aminu Kano International Airport, Kano were on Monday temporarily grounded following face-off between the Federal Airports Authority of Nigeria (FAAN) and the Nigerian Airspace Management Agency over non-payment of electricity bills….

The Anambra State Police Command on Monday gave casualty figure on the attack in Anambra State by gunmen on the convoy of Senator Ifeanyi Ubah, disclosing that five persons lost their lives during the attack….

Ondo White Paper: No King Has Right To Claim Paramountcy Over Others ― Govt

Ondo State government on Monday stated that paramountcy is alien to, and not part of the Chief’s Law of the state, just as it declared that no king in the state has the right to paramountcy claim…

Comedian Bovi explains why he renovated his primary school in Benin