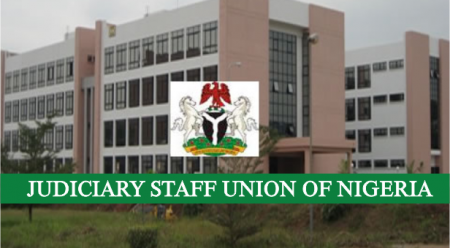 Judiciary workers under the auspices of the Judiciary Staff Union of Nigeria (JUSUN) in Ondo State, on Tuesday, grounded activities at all the various courts following the nationwide strike embarked by the
the union.

The National body of JUSUN had directed its members across the nation to down tools, demanding
and protesting against the non-implementation of financial autonomy for the judiciary.

The strike action was led by the state Chairman, Comrade Femi Afolabi, who said the action was in compliance with the directive from the national body of JUSUN.

Some lawyers and litigants were turned back by the workers at the gates of the court locked by JUSUN Officers while the staff of the Federal High Court were forced out of the premises.

At about 25 minutes, the train slowed down at the uncompleted Omi-Adio terminal, a village on the Abeokuta/Ibadan expressway; it’s a stone throw from Apata in Ibadan. Conveyance of passengers from there and other terminals has not kickstarted as the terminals are still under construction and workers were found there…Strike: Judiciary workers shut down courts in Ondo