Inside Ibadan bound train from Lagos

Features
By Bioluwatife Akinyemi On Feb 27, 2021 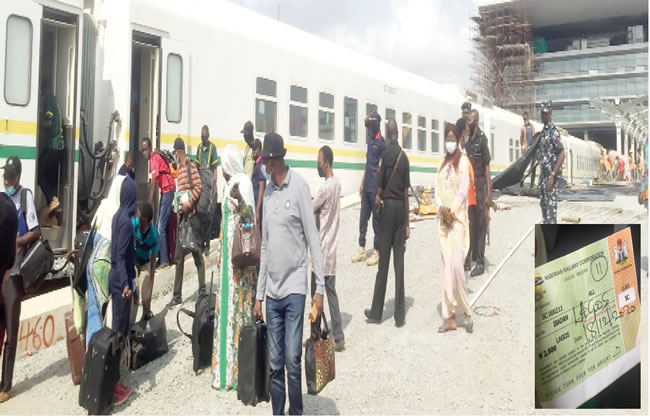 In another 25 minutes, it slowed down in another uncompleted terminal in Olodo and from there to the Abeokuta terminal where it picked some people who were also travelling to Lagos. The train was expected to have a stopover of five minutes at the station but it spent more than that, making the journey 10 minutes later than the arrival time to Lagos.

The turn out at the Abeokuta station also, was quite impressive. The train moved ahead from there to the uncompleted Papalanto terminal, with a slowdown in the pace of movement after 25 minutes and for another 20minutes from there to the Agbado terminal in Ogun State. From Agbado to the terminal in Agege, Lagos, one could see the tracks of the old and seemingly abandoned railways. It took 25 minutes to get there also and another 25 minutes to arrive at the Lagos station in Alagomeji, Yaba at exactly 10:40 hours.

The reporter’s mind went back to his experience earlier that day, searching for the rail station.

Foggy as the dawn of the day was, coupled with a humid temperature and a dusty road trip was certainly the lot of this reporter on an Okada.

Moniya, a community that houses the headquarters of Akinyele local government area in Ibadan has been a crowded residential area despite its distance from the core part of the metropolis and its proximity to Oyo town. Its popularity and openness to progressive migration by Ibadan citizens, no doubt, will become a talk of the town with the commencement of train services from Ibadan to Lagos.

The station is quite distant from the Ibadan municipality. Two minutes later than the boarding time which is 07:30 hours, the reporter queued along with travellers who chose to move in the economy class of the train coaches.

With face mask on, the reporter was made to present a means of identification as a Nigerian before a ticket of #2500 was issued, he presented his permanent voter’s card (PVC) — This, the reporter had been told a day before the journey after making phone calls to one of the mobile numbers emboldened on the picture of a Nigerian Railway Corporation banner, which was seen on Facebook. Unknowingly to other passengers, there was no provision for electronic payment of fares and online purchase of tickets. In their state of displeasure on that, a passenger said “it’s unsafe for travellers and the Nigerian railway corporation to trade in cash.”

The total number of security men found there weren’t more than five.

Tade Ipadeola, a lawyer and an award-winning poet shared the same view with other Nigerians at the train station. He told me how elated he was, to see train services being reincarnated and rejuvenated in Nigeria after decades on epileptic and badly managed activities. He told me how he nearly missed a flight from PortHarcourt to Lagos in the mid 2000s because the airline sold more tickets than aeroplane seating capacity; hoping such won’t repeat itself in the train ride. He, however, expresses his hope that the train will be greatly managed and maintained.

A school principal who pleaded anonymity also commended the services of the train and articulately described her last experience on a Nigerian train in the 80s, as a terrible one. In her elixir mood, she was making videos, snapping pictures and making phone calls to her family members, telling them about the train.

A businessman, who also chose to be unidentified came in with his three children, telling me how he had travelled on a train in the UK, US and some other parts of the world, and not in Nigeria. He told me how he chose to seize this opportunity to have a first time experience in Nigeria, together with his kids. The kids were seen calling their mum to describe how the train looks like and how smooth the journey was going. He was expressly happy and could not hide it.

Describing the train and its services

After speaking with Barr. Ipadeola, passengers were marched into the seemingly new and clean coaches of the train, according to our classes of payment.

The seats of the train were comfy and neatly designed with three seats on a row and two at the other row, with a spacious walkway in between and an overhead cabin for luggage; together with a perfectly working air-conditioning service and some ten inches television sets. The train windows gave a clear scenery of overhead bridges, railway intersections forests, plantations and settlements; with the rising of the sun intruding the sight of the aesthetics at the opening of the blue curtains. It has an electric socket and two USB ports at the side of each seats. The train workers (a nurse, protocols and cleaners) were seen walking around and doing necessary checking. The toilet was clean and modern.

Train service before now and the railway resuscitation process in Nigeria

It would be recalled that the first train journey from Lagos to Ibadan was taken in the early 1900s by the British government ruling in today’s southern Nigeria at the time and by 1964, the rail lines had transported 11,288,000 passengers and 2,960,000 tonnes of freight in a year, employing about 45,000 people, according to the Nigerian Railway Corporation (NRC). Sadly, by 2003, these rail lines started failing.

However, the Goodluck Jonathan and President Muhammadu Buhari administrations have began the modernisation rocess for the rail lines.  In July 2016, President Muhammadu Buhari, inaugurated the 187 km standard gauge line between Kaduna and Abuja. While in March 2017, Vice-President Yemi Osinbajo, who was the acting President then, flagged off the construction of the Lagos-Ibadan Railway Project. It was expected to be completed in December 2018. The tracks have been completed while the stations and terminals are yet to be completed two years after.

In November 2020, the Minister of Transportation, Rotimi Amaechi at the 2021 defence of the budget of the ministry before the National Assembly’s Joint Committee on Land and Marine Transport, said that the Federal Government needed $656 million to complete the Lagos-Ibadan rail line. And in December 2020, the minister said at an event that the president would commission the Lagos-Ibadan rail line in January 2021. Mid-February 2021, the stations in Lagos and Ibadan are about 30 per cent far from completion.

Comments from a railway staff

In a conversation with an official of the Nigerian Railway Corporation (NRC) about the usage of the train services ahead of commissioning and its feasibility in January as promised by the minister, he said: “This project is still with the CCCC. Work is still in progress. We are test-running the facility for now.

“It can only be commissioned when it must have been handed over to the Federal Government and the Nigerian Railway Corporation.

“At the moment, we transport some of our workers from our old station in Dugbe to Moniya in the morning ahead of the journey to Lagos and then return them in the evening when the train must have returned.”

When asked about the fate of the seemingly abandoned old tracks, the narrow gauge railway that conveys people from Lagos to Kano, he assured of its usage alongside the new standard gauge railway. He said: “Nothing is really wrong with the tracks. We have not condemned them, neither have we abandoned them. The free train service is going to be run alongside the new one.

“We are trying to put some things in place for now as we only had to stop the conveyance of passengers in April because we had a wash off in some parts of the railway at the peak of the rainy season.

“In fact, Osun State government sponsored the movement of its indigenes from Lagos to the state during the festive period; and we travelled with the train two times in December and once in January.”

He added that a private PoS business owner has been temporarily incorporated into the system at the new Ibadan station in Moniya, to make withdrawals easy for passengers that will be coming to the station without cash. “We brought in someone towards the end of the year, who runs a PoS business. He’s to be consulted for withdrawals before payment for tickets could be done in cash, pending the time the station will be completed and we are going to start operations properly,” he said.

Why yellow buses have to leave Lagos roads —Govt