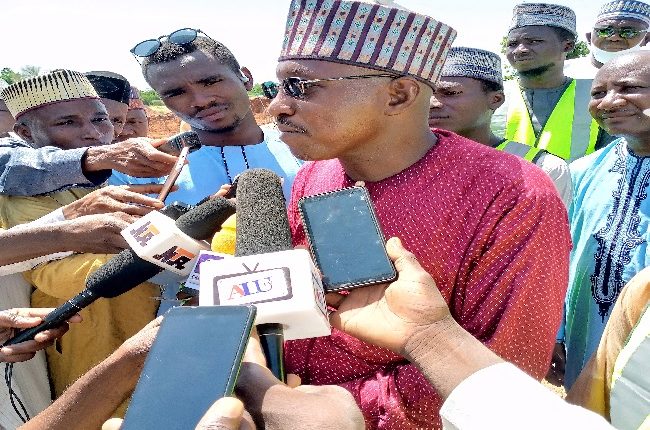 The Nigerian Union of Journalist (NUJ), in Sokoto, has tasks contractors handling various developmental project in the state not to compromise on the quality of work to be delivered.

The state chairman of the union, Comrade Isa Abubakar Shuni stated this when he led his members on an inspection tour of 2.4B naira Government Girls Science Academy, Kasarawa, projects awarded by Sokoto State government.

The chairman while reacting to the job done on the site so far, commended the contractor for a good start which he described as encouraging and urge them to keep the pace.

He explained that the school when completed will help in producing more quality health personnel for the state in the nearest future.

He appealed to the government not to politicize admission and other activities of the school when completed.

Shuni further disclosed that the school if well managed will go a long way to benefits the state in terms of provision of more quality medical personnel and other science-related programmes.

Earlier in his remarks, the site supervisor from the state ministry of works, Architect Halilu Ladan, disclosed that the project was awarded by the state government to the contractor at the sum of 2.4 billion Naira.

Ladan, who is an assistant director in the ministry said the contractor mobilized to site on August 31 and was given a period of 18 months to deliver on the project.

The school, when completed according to Ladan is expected to be computer-based with a capacity of 1500 library with CBT.

ALSO READ: Pastor Sam Adeyemi to Buhari: ‘We have an unusual opportunity with #ENDSARS protests’

He said, “the school consists of two block classroom in which each of the blocks accommodates 18 numbers of classrooms.

“It also contains four different laboratories with additional six classrooms, making the number of classrooms to be 40 in total.

“The school further has two blocks of the hostel, while each block has a total of 750-bed space capacity with a provision of seven block staff quarters”.

Ladan also explained that the school when completed will boast of Clinic, Dinning, Playground, Administrative block which contains administrative office, staff room and other academic and non-academic staff of the school.