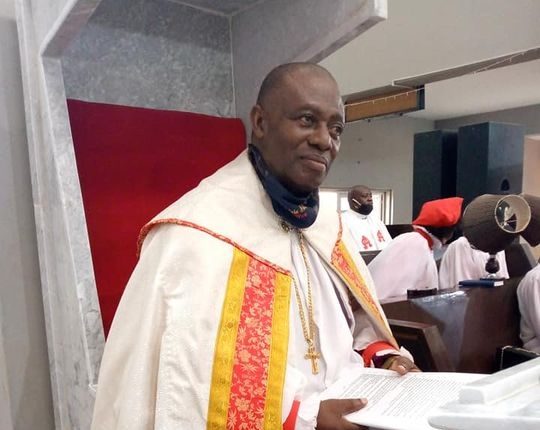 The Bishop of Diocese of Ijebu North (Anglican Communion), The Right Reverend Solomon Kuponu, has said that Nigeria as a failed state needs restructuring to avoid its existence as a united indivisible nation.

He stated this in his charge at the third session of the Fifth Synod of the Diocese, held at St. Phillip’s Anglican Church, Oke-Agbo, Ijebu-Igbo, that the country is under the weight of corruption; abuse of power; injustice and lack of progressive development.

The theme of the Synod is “Preach the word, Do the work, Run the race.”

The cleric noted that the country is being controlled and influenced by cabals who “disguise as warlords, godfathers made up of various tribes with a common selfish interest and the morning taste for absolute power and control.”

Bishop Kuponu urged Nigerians to demand restructuring through a referendum that would bring about a structural change in the system of government.

He explained that this development would guarantee liberty, equity, the pursuit of happiness and systemic regional development and economic transformation.

“Nigeria must be restructured to survive. The agitation for restructuring has fallen upon deaf ears by those who are benefitting from the current chaos and the unitary system which is counterproductive to a democratic dispensation.

“The time has come for a total transformation of Nigeria through restructuring and patriotism. The strategies’ must be driven by educational empowerment, skills acquisition, political transformation, social consciousness, universal moral standards as the cornerstone of our laws and statutes, entrepreneurship, youth and women empowerment,” the Bishop added.

Bishop Kuponu advised the Federal Government to fund the nation’s public universities, submitting that the rot in the nation’s ivory towers are so deep and needed attention.

He commended the Academic Staff Union of Universities (ASUU) for their doggedness in demanding a better academic environment among others.

The Bishop added: “Academic activities have been ruptured again in the country’s universities since March this year, as the Academic Staff Union of Universities resumed its strike over epileptic funding, and issue of salary disbursement via Integrated Payroll and Personnel Information System (IPPIS), which they rejected for being faulty and therefore urge the government to embrace the University Transparency Accountability Solution (UTAS).

“Since the 1990s, the drive for improved funding of universities has been an inexorable part of their existence. The latest unease is rooted in the Federal Government’s infidelity to the 2009 agreement, which it entered into with the union. The pact entails the release of N1.3 trillion to universities to reverse their present state of decay.

“However, the government has been foot-dragging on the implementation of the financial aspect, renegotiated in 2013. The deal stipulated N220 billion annual funding of universities after the first instalment of N200 billion had been released.”