Resetting Nigeria! •Why the project is not working 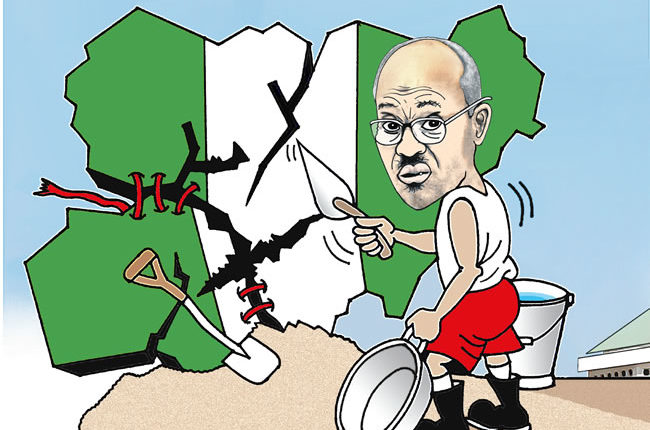 With the country seriously aching in all joints and the economy wobbling with attendant adverse effects on jobs and wellbeing of the citizenry as well as security of lives and property, even as hope of a redemption appears to be thinning out, Group Politics Editor, KUNLE ODEREMI, interrogates the many issues stalling the rising of the country, emphasizing the need for the leadership to press the reset button on the levers of the polity.

The projected expenditure under the once  much- orchestrated Nigeria’s Vision 20:2020 development agenda was put at N32 trillion. Out of the amount, the 36 states in the country were expected to contribute N9 trillion, with the Federal Government providing N10 trillion. The private investors and development partners were to inject N13 trillion.

It has turned out to be a pipe dream.

About a month to the ‘expiration’ of the magic year, the country is seemingly in a state of flux. Its economy is in a shambles and dire straits, with the dip and oscillation in the global price of crude oil, Nigeria’s main economic mainstay, and the consequent sharp decline in its export quota allocated by the cartel, Organisation of Oil Producing Countries (OPEC) from about two million barrels per day to 1.4 million barrels. Promises of diversification of the economy from years of mono-product dependency to other areas and sectors with huge potential and prospects of enormous foreign revenues have failed to crystalise.

At the dawn of a new year, 2021, government is paranoid by a wave of insecurity of lives and properties. The nation is beset with the scourge of terrorism, insurgency, banditry, kidnapping, and other forms of violent crimes. The Senate Committee on the Army confirmed last week that the personnel of the military are currently involved internal security operations in 33 out the 36 states in the country.

The rate of unemployment remains scary. While many have continued to lose their jobs owing to the vagaries of the time, millions face a life of uncertainty due to joblessness. The absence of a sustained conducive environment for genuine investors with huge portfolios constitutes a major stumbling block for multiplicity of job opportunities across the country. The climate of fear, which is engendered by the spate of insecurity of lives and properties, scares players in the non-oil sector, where the majority of Nigerians derive their means of livelihood. Yet, there is the frightening challenge of debt burden, ostensibly created by government borrowings and unsettled accumulated domestic bills and international commitments and obligations.

Though the authorities claim that government’s borrowing spree was meant to give fillip to the comatose economy, derelict infrastructure and reflate other critical sectors, some observers doubt the proper management of those resources based on the antecedents of Nigerian authorities. The critics premised their pessimism on government’s culture of mismanagement; attributing the debt burden to what they termed as misplaced priorities; absence of fiscal indiscipline and weak control mechanism; bad governance; abuse of office and power.

With rising unemployment, weak and unstable economy, as well as improper planning and policy inconsistency, the poverty index in the country has consistently elicited public concern. Today, Nigeria is considered as among poverty-ridden countries of the world. And for the umpteenth time, President Muhammadu  Buhari, underscores this fact with a declaration that his administration has an ambitious plan of taking about 100 million Nigerians out of poverty. A World Bank report once stated that almost half the population of the country lived below the international poverty line, with population growth rate higher than economic growth rate.

Politics has become a veritable vehicle for corrupt enrichment by public and/or elected officials who exploit it to build business empires.

The struggle for power among the elite is predicated on selfish and destructive motives, as those found to be encouraging impunity and lawlessness are celebrated and grouped as scared cows. Politics remains prebendal politics rather than based on philosophy, principles and inclusiveness.

Whereas it was considered expedient to introduce and adopt the principle of Federal character due to the ethnic heterogeneity of the country, the application has been a major seed of discord due to high-handedness on the part of the ruling establishment. Protestations against the perceived act of injustice, lack of equity and fairness in the scheme of things constantly manifest in the series of agitations, campaigns and demands by the various ethnic nationalities for a review of the existing federal structure for the purpose of addressing the anomalies.

Issues bordering on infrastructure gap across the country are in legion. Years of neglect had led to many infrastructure collapsing, others poorly rehabilitated by grossly incompetent contractors in collusion with a few unpatriotic public officials. Inequitable distribution of projects across the zones often triggers tension and suspicion, as well as threats and counter-threats by stakeholders.  According to the Government Infrastructure Concession Regulatory Commission, there are about 195,000 kilometres of road network with about 60,000 kilometres paved as of 2019. It is also claimed that majority of the highways were constructed a more than four decades ago.

Critical sectors like education that should be the fulcrum for human capacity building are burdened and encumbered by a litany of woes. There are millions of out-of-school children across the country. Hordes of graduates from higher institutions grope in the dark, owing to a dearth of employment opportunities; institutions of higher learning have almost become a shadow of themselves due to inadequate funding, outdated facilities and equipment. Public hospitals remain what they were called by the military about four decades ago: mere consulting clinics.  Social safety nets designed by government are conduits to siphon funds and other scarce resources that form the patrimony of the citizenry.

All these factors and issues encapsulate the uncertain times prevalent in a country of more than 200 million citizens, aside being endowed with huge mineral deposits and abundant agricultural potential.  The nation’s youths look into the future with despair and despondency, just as the elderly are nostalgic about the past when leadership was about service to mankind. How should we reset a country that at a time in the past claimed it did not know what to do with excess liquidity that made Nigerians the envy and cynosure of eyes in elite shops in the streets of London and other parts of Europe in the 1970s and 1980s?

In 1984, Nobel Laureate, Professor Wole Soyinka, drew the flak from certain quarters  for lamentating over the despicable elite that had brought Nigeria to its knees. He was criticised for the coinage, wasted generation, to depict and decry the opportunities of his age bracket were denied as a result of lack of vision by an inept political leadership. The renowned scholar had said: “After a quarter of a century of witnessing and occasionally participating in varied aspects of social struggle in all their shifting tempi, dimensions, pragmatic and sometimes even ideologically oriented goals, I feel at this moment that I can only describe my generation as the wasted generation, frustrated by forces which are readily recognisable, which can be understood and analysed but which nevertheless have succeeded in defying whatever weapons such ‘understanding’ has been able to muster towards their defeats.”

To prove that he meant all he said in 1984, Soyinka reinforced the message when he featured on BBC Programme: Hard Talk.  He declared: “I compare today with dreams and aspirations we had when we all rushed home after studies abroad. We considered ourselves the renaissance people that were going to lift the continent to world standards, competitors anywhere. It hasn’t happened.” In the views of some observers, perhaps, his description and coinage of the inadequacies then could probably be an understatement to capture the country’s current state of flux.

LAUTECH and the war postponed

…And Iku Baba Yeye at his best