As Reps give hope over confab report… 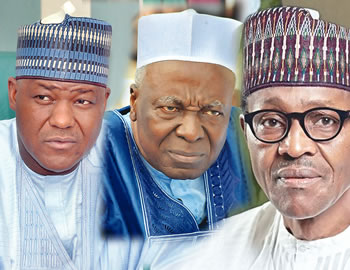 Will Buhari sanction new constitution with confab recommendations? The House of Representatives adhoc committee on constitution amendment adopted the report of 2014 national conference convened by former President Goodluck Jonathan as a working document for the amendment. DARE ADEKANMBI and MOSES ALAO examine the development against the backdrop of calls for implementation of the report.

After many had feared it would be left to decay and gather dust in the archives, hope came for the recommendations of the 2014 national conference organised by the immediate past administration, with the decision of the House of Representatives to make the report form part of its considerations as the National Assembly embarks on another constitution amendment exercise.

Opposition against the conference and its report peaked when President Muhammadu Buhari reportedly said he would not have anything to do with the report that was part of the bulky documents handed over to him by his predecessor, President Goodluck Jonathan. His party, the All Progressives Congress (APC), had refused to participate in the conference, an exercise it considered as a political move to make Jonathan’s re-election bid to be surefooted.

But with the resurgence of ethno-religious and other conflicts and violence in many parts of the country in the life of the current administration, there have been renewed calls for the Buhari-led administration to drop its opposition to the implementation of the confab report, which many reason would address some of the challenges against national cohesion and unity.

At first, the leadership was battling to contain the threat posed by the secessionist demand of members of the Indigenous People of Biafra (IPOB) who have also been strident in their agitation for a restructuring of the country or the secession of what they tag the Biafra Republic from the union. A group from the country’s oil-rich zone, the Niger Delta Avengers (NDA), has been carrying out attacks on the country’s crude oil pipelines in a no-oil-flow campaign. The country’s crude oil production capacities have been greatly impaired by the group.

Rising from a meeting in Umuahia, the Abia State capital, last week, a coalition of civil society organisations and pressure groups under the aegis of the Old Eastern Region Movement, demanded that the report be implemented and called for a referendum to determine the future of the country. The movement condemned the intimation of IPOB members and other innocent youths in the region and “whose only sin is their loss of faith in the lopsided, unfair and unjust unitary Nigeria where some regions are continuously treated as conquered people.” Mr Nmadi Kanu, leader of IPOB currently in detention, is standing trial for treason, a charge he denied.

The Umahia event came barely two weeks after a meeting of South-West, Ijaw and other southern leaders in Lagos State, on the killing of people allegedly by Niger Delta militants in some Lagos and Ogun state communities. The southern leaders not only pledged to work together and build a common platform but also decried the perceived lopsidedness in the appointments made by President Buhari, particularly in the country’s security architecture which they described as over pro-North.

Chairman of the adhoc committee and Deputy Speaker, Honourable Lasun Yussuff, confirmed the development, saying that consultants hired by the House have also been given copies and guide the committee with their insight. He, however, did not hint at what recommendations the committee would incorporate in its agenda for the exercise.

“The House of Representatives Special Adhoc Committee on the review of the 1999 Constitution has adopted the report of the national conference, 2014 as part of its working document.

“The decision to adopt the report of the conference was taken at a working session/retreat of the committee recently held at Transcorp Hotel, Abuja.

“Some of the salient proposals in the report would be turned into draft bills which would be presented to the House for adoption and passage,” Yusuff disclosed.

Some of the key recommendations

The recommendations distilled from the debates by the 492 conferees have been divided into two parts. The first contains those resolutions that will require the amendment of the 1999 Constitution and such have been prepared in the form of bills ready for legislative debate. The second has resolutions which are ready for implementation since they are already by capsules of policies.

In order to douse the tension associated with the agitation for resource control or fiscal federalism, the national conference resolved the setting up of a technical committee to resolve the logjam since the matter requires some technical details to resolve. The conferees had been torn between those clamouring for increase in the percentage allocated to oil-producing states from 13 per cent.

The conference recommended addition 18 states following hundreds of requests from various groups and associations across the country. The states recommended are: Apa, Edu, Kainji, Katagum, Savannah, Amana, Gurara, Ghari, Etiti, Aba, Adada, Njaba-Anim, Anioma, Orashi, Ogoja, Ijebu and New Oyo. In addition to these states (three from each geo-political zone), the conference advocated an addition state for the South-East, which has five states, to bring it on par with other zones, with the exception of the North-West which boasts of seven.

System and structure of government

The conference agreed that the presidential system of government adopted since 1979 is fraught with some problems. Consequently, the conference recommended what it called the Modified Presidential System, which is a fusion of the features of parliamentarism and presidentialism. One of the features of the recommended model is that the president will nominate his running mate from the legislature. On the structure and size of government, the conference recommended the appointment of not more than 18 ministers from the geo-political zones, that is, three ministers each from the zones, with a recommendation of constitution amendment to the clause that compels a president to appoint a minister from every state of the federation. To reduce the huge cost associated with presidentialism, the conference resolved that 30 per cent of the ministers, six of the ministers, should come from among the federal lawmakers.

While the conference voted for the retention of bicameral legislative framework currently in practice, it, however, recommended that members of parliament in all the legislative arms at the federal, state and local government should serve part-time.

On this, the conference resolved that the presidential seat should rotate between the North and the South and among the geopolitical zones, just as the seat of governor should also rotate among the three senatorial districts in each state. It added the enactment of law to enshrine the recommendation in the constitution.

Special courts were advocated to handle corruption cases so as to free such cases from the interminable adjournments that prevent speedy trial of such.  A non-conviction-based asset forfeiture law should be enacted with broad provisions to deal with all issues of proceeds of crimes by the anti-graft agencies and the courts.

Although calls for the implementation of the reports have gained considerable currency in recent weeks, analysts doubt that the president will assent a new constitution in view of his opposition to the conference and its recommendations. Such analysts are quick to point at the remarks made recently by the Mr Babachir Lawal, who is the Secretary to the Government of the Federation. The SGF had said the confab report was not a priority of the Buhari administration, deriding the conference as a ‘job for the boys’ exercise since each conferee got N7 million each.

“The government has not taken a decision on the 2014 National Conference. I understand that some Nigerians want it implemented, but the government has been too busy with key areas of governance to talk about an exercise that we thought was essentially diversionary and a sort of, maybe, a “job for the boys.”

“If you remember, it was reported that almost everybody in the committee got N7 million and we consider it essentially as job for the boys. They probably produced a document that is good and commendable but I mean, this government is too busy with very more vital areas of governance and we are not intending to spend our time reading reports,” he said.

A former member of the House of Representatives and delegate to the conference, Honourable Mudathir Sekoni, commended the House for adopting the report. “In spite of all the misgivings by the nation, the national conference report is a fantastic work; it can bring stability to Nigeria. If we can adopt that report, most of the things we are agitating for now, such as the restructuring of the country and others, will be addressed.

Speaking further, he noted that if the National Assembly, which had reservations in the past about the confab, had become quite responsible as to accept what the citizens want and which the confab worked towards, the Presidency should stop being political and become patriotic. “No political party will readily accept the responsibility of implementing the effort of another party no matter how patriotic. But we will have to forgo our individual sentiments and consider the interest of Nigeria by being patriotic,” he said.

Was the House of Representatives committee playing politics when it adopted the confab report? Some observers answer in the affirmative on the premise that the lawmakers might have seen argument for and against the implementation of the report as a political football and thus decided to harvest a lot of goodwill from the public by siding with those calling for report implementation. To these observers, when conferees called for a referendum on the implementation of the recommendations, the seventh National Assembly members strongly opposed the referendum and arrogated to itself the power of life and death over the report. Why, query analysts in this school of thought, the volte face?

But another set of analysts opine that whatever be the motive, the adoption of the report is a major step forward. These analysts are, however, calling on the National Assembly to convince Nigerians further by acceding to the demand for a referendum on some of the recommendations the lawmakers may want to  ‘kill’ or ignore or water down through modifications.

For the president, some observers reason that the baby should not be thrown away with the bathwater; that whatever may be Buhari’s points against the confab, looking at some of the recommendations, especially those offering far-reaching solutions to the problems of national cohesion should not be brushed aside.

‘Christians are duty-bound to move the gospel forward’