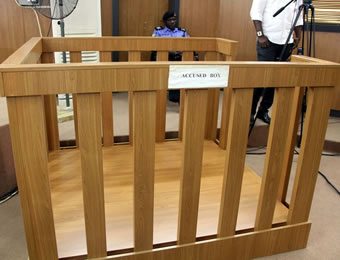 Share
The police on Wednesday, arraigned three men, 37 years old Tunde Jimoh, 40 years old Gbenga Babalade and 42 years old Olatunji Hammed  before the Iyaganku Chief Magistrate Court II sitting in Ibadan on a five-count charge bordering on alleged conspiracy, murder, armed robbery, unlawful possession and accessory after the fact
The police prosecutor in the charge delineated MI/563c/17, ASP Sunday Ogunremi, while narrating the allegations before the court stated that the suspects on or at about 3:00 pm -1:00 pm between Atiba, Oyo area in Oyo State within the Ibadan Magisterial District and Igbo Nla area in Kwara State, did conspire together to commit felony to wit murder
Ogunremi alleged that the suspects killed a man identified as Akinteye Stephen Oyeyemi with‎ intent to use his heart for money rituals on the same date ‎and place in the aforementioned time
The prosecutor alleged that the trio armed themselves with a single barrel cut to size gun, cutlass and knife to rob Mr. Akinteye Stephen Odeyemi of the sum of one hundred thousand naira (100,000.00)
Ogunremi also told the court that they did unlawfully have one cut to size gun with two life cartridges in their possession and also intentionally concealed the information and failed to report the offence to the police and consequently became an accessory after the fact to murder
The offences according to the prosecutor contravenes Sections 324, 319 (1)(2)(a) and (b), 3(1) and 322(9) of the Criminal Code Cap 38, Vol. II, Laws of Oyo State of Nigeria 2000.
The trio pleaded not guilty to the charges and the legal counsel representing Hammed Olatunji, the third defendant, Mr.Segun Popoola, applied to the court for bail on behalf of his client.

Chief Magistrate Abiola  Richard  (Mrs) while ruling on the bail application however denied the defendant bail on the grounds that bail cannot be granted in a capital offense as if found guilty, punishment for such offences is life imprisonment
Chief Magistrate Richard adjourned the case till May 8, 2017 pending legal advice and ordered that the defendants be remanded at the Agodi prison pending advice from the Directorate of Public Prosecution.
armed robberyconspiracyMurderpolice
Share