‘She was my pillar, yet I bear no grudge against her killers’ 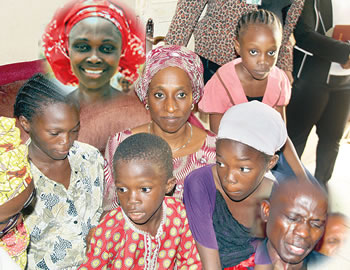 The circumstances surrounding the death of a woman evangelist, Deaconess Eunice Olawale, has no doubt generated an outrage from different quarters. ADETOLA BADEMOSI writes on the effect of the incidence on the immediate family and the Christian community.

BEFORE  the ‘Morning Call’ which turned out to be her last, Deaconess Eunice Olawale was a recognised voice in her Kubwa, Abuja community. Her husband, a full time pastor, just before her death, was afraid that something terrible might happen to her. That was as a result of an event his wife reported to him.

Deaconess Olawale had told her husband, Elisha Olawale that an Imam in a nearby mosque had commended her preaching one morning. Her husband did not take the compliments positively. He was actually afraid and warned her to be careful. The warning did not stop the tragedy. .

“My wife never argued with anyone. She was the giving type and the church (Redeemed Christian Church of God) can confirm that. About three weeks before her death, my wife went to the back of my house. That morning, after preaching, she came and told me that a man in the mosque heard her and called on people to listen to what she was saying.

“When she came back and told me about it, I warned her. I did that because I was a Muslim before I converted and became a Christian. I told her to be careful. I told her that although what the man in the mosque said was commendable, she needed to be careful,” Pastor Olawale said of his wife.

“I will miss everything about my wife, she was my mother, she was my sister, before she died, she knew what I have in my account and I knew what she had in her account, we have been open to each other. She was almost all we had,” he added.

Pastor Olawale, however, declared his forgiveness for his wife’s killers saying as a Christian, it was not in his nature to seek personal revenge.

“As a Pastor and a man of God, God called us and gave us the ministry of reconciliation. If they arrest them, killing them won’t help them, we are just helping the devil more. What I will suggest is that if they should preach to them, they should accept Christ. Heaven has more gain; as long as my wife has gone to heaven, if they accept Christ, that will be my joy.”

To Christian communities across the nation, the new development was becoming a little too much, coming on the heels of other unprovoked attacks from religious extremists which had led to the death of others, especially in the northern parts of the country in recent times.

Sunday Tribune recalls that recently, a Christian Igbo trader, Mrs. Bridget Agbaheme, was murdered at Wambai market, Kaduna State following a confrontation with a Muslim man who came to the front of her shop to perform ablution. The 74-year-old trader paid with her life for objecting to the man performing ablution in front of her shop.

Another instance was the murder a cleric of the Evangelical Church Winning All (ECWA), Reverend  Zakariya, by suspected Fulani herdsmen in Obi Local Government Area of Nasarawa State. The cleric was reportedly attacked on his farm, where his arms, legs, and head were cut off with a machete.

These and many others have led to the call by the Christian Association of Nigeria (CAN) for all Christians in the country to defend themselves against unprovoked attacks often, perpetrated by the religion extremists.

On the part of the security agencies, it was gathered that four out of the six suspected killers of Mrs Olawale have been released by the Nigerian Police on the premise that there were no evidences connecting them to the murder in question.

According to the FCT Commissioner of Police, CP Ibrahim Idris, the other two suspects are still in detention to help in the ongoing investigation to track down perpetrators of the murder.

Meanwhile, CAN, in a statement issued by its General Secretary, Reverend Dr Musa Asake, in reaction to the death of late Mrs. Olawale, stated that Nigeria was already doing a macabre dance of death, as the Federal Government was doing nothing to stem the tide.

While commiserating with the victim’s family, the Christian body noted that the recurring decimal of violence and murder of innocent Nigerian citizens on the basis of religious intolerance incidences specific and relevant response from all concerned citizens in the country, especially when the government in power was slow at addressing the menace.

“The discrimination against non-Muslims in Nigeria under the Buhari administration is assuming a dangerous dimension that should not be left to the vagaries of time and circumstance to resolve.

“You will agree with me that with these happenings and the lukewarm attitude by the authorities concerned toward putting an end to it, Nigeria is dancing a macabre dance, both for the nation and for its citizens. It is time to stop the beat and let common sense guide the nation out of the present quagmire. A stitch in time saves nine,” the statement read.

In like terms, the FCT Chapter of CAN observed that the circumstances of the killings could be interpreted as disallowing the right of speech and worship the Nigerian constitution.

Meanwhile, the burial arrangements for the late Deaconess Olawale, has been suspended indefinitely to allow for an autopsy to be conducted on the deceased and ensure  thorough investigations on the issue, with the aim of bringing the culprits to book.

Also, Sunday Tribune reliably gathered that human rights lawyer, Femi Falana (SAN) has been hired by an interested party to forestall plans to sweep the matter under the carpet.

Senate and its endless rumbles, drama