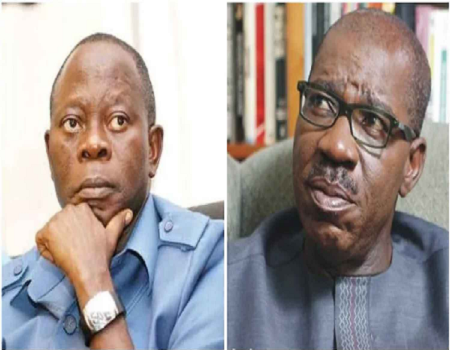 The Chief of Staff to Edo State Governor Godwin Obaseki, Mr. Taiwo Akerele has assured that the current disagreement between Governor Obaseki and the national chairman of the All Progressives Congress (APC), Comrade Adams Oshiomhole will soon be resolved amicably.

Akerele who spoke with journalists in Benin yesterday said that the governor remained the leader of the party in the state while Oshiomhole continued to be the father of all not only as a former governor but as the current national chairman.

The chief of staff said that the quarrel between both men was a normal political disagreement which will eventually be settled.

He said: “The governor remains the leader of the party in the state while Comrade continues to be the father of all not only as a former governor but as current national chairman. Adams Oshiomhole is our man anytime any day and he is best of friends with Godwin Obaseki. What happened was a normal political disagreement that will be settled. Every other issue is subsumed under this sub-issue. In any case, no matter how we war, dialogue and peaceful settlement remain the ultimate.”

He noted that Governor Obaseki meant well for the people and so required the support of all APC members and the general electorate.

He described Obaseki as a very versatile and experienced man who he worked with for eight years before he became governor, adding they were very close friends even though he (Obaseki) was way older than him in the economic team then.

“He treated all of us equally along with Igbinidu Inneh who is chairman Internal Revenue Service a very intelligent fellow with an MBA from Imperial College, and Henry Idogun who is the MD of the Procurement Agency a chartered accountant and others. Godwin Obaseki is a highly detribalized Nigerian.

“He has worked with people from different ethnic groups from all over Nigeria. He is very much in touch with his native Benin/ Edo origin and I am always very happy when I hear him speak the Benin language very eloquently. He comes from one of the most educated, industrialized, enterprising and large families in the city.

Akerele recalled that as head of Comrade Oshiomhole’s economic team when he (Obaseki) made up his mind to run for governorship, he was among the first set of believers and was sure he would make a very good governor.

He explained that he never doubted Obaseki’s capacity and immediately started work on a voluntary basis, noting however that when he first mentioned his name in his Local Government Area of Akoko-Edo, he was looked at as a very unserious fellow but was justified as the governor is doing a great job.

TOWARDS straightening out wrinkles in the coalition that birthed the Peoples Democratic Party (PDP) government of Governor.  Seyi Makinde in Oyo State, leaders of the coalition met behind closed-door in Ibadan, the state capital, on Friday night… Read full story