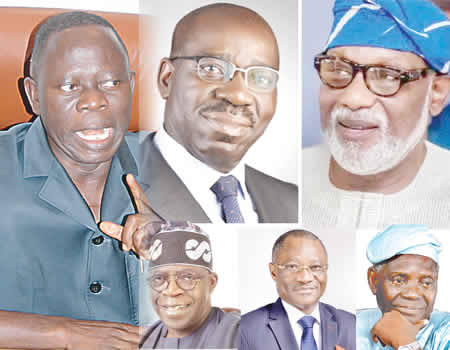 The plot to oust the national chairman of the All Progressives Congress, Adams Oshiomhole, has turned out to be an anticlimax.

Meetings of the strategic organs of the party, the national caucus and the National Executive Committee (NEC), were shelved following the intervention of President Muhammadu Buhari.

A  three-member Justices of the  Court of Appeal, in a ruling delivered by Justice Abubakar Datti Yahaya, vacated the earlier order of Justice Danlami Senchi of the Federal Capital Territory, which sacked Oshiomhole as APC national chairman.

Investigation revealed that reprieve was secured for the APC national chairman, following the trouble shooting initiative of President Buhari.

At the end of a meeting with the APC governors led by their chairman and Kebbi State governor, Atiku Bagudu, certain conditions were given.

One of such is the reversal of the suspension order placed on certain chieftains by the  national chairman of the party.

In fulfillment of that condition, the duo of Aminu Abdulkadir and Senator Lawan Shuaibu, national vice chairman (North-West) and deputy national chairman (North) respectively have been asked to resume to their positions at the end of the National Working Committee (NWC) meeting held on Wednesday.

The source also hinted that the governors demanded the right of first refusal for their colleagues in Edo and Ondo states, Godwin Obaseki and Rotimi Akeredolu ahead of the governorship elections.

For Ondo State, investigation revealed that Oshiomhole might find it smooth to redeem his side of the bargain because he is allegedly being used to fight a proxy war by a certain national leader of the party, unlike in his home state of Edo where he is embroiled in a power tussle with his estranged political son, the Edo state governor, Godwin Obaseki.

The party source said: ‘’When the governors met before seeing the president, there was unanimity, as the governors maintained that the condition for Oshiomhole’s continued stay as chairman of the APC was that he delivered Edo and Ondo State governors.

‘’There were other conditions as well, which mandated Oshiomhole to recall suspended members of the APC. Oshiomhole was also to stop his highhandness and work with members of the NWC and the leaders of the party, as against his former style.

‘’The governors have presented this position to the President and that was what guatanteed the reconciliatory moves that have manifested in the last few days.”

Ahead of the October 10 governorship election, certain aspirants in league for the seat occupied by the incumbent, who is also seeking for a fresh mandate, Rotimi Akeredolu, have turned themselves into an opposition flank within the ruling party in the state.

Operating under the aegis of Ondo State APC Unity Forum, the group is led by former deputy governor,  Alhaji Ali Olanusi. Other leaders in the group are Chief Erastus Akeju; Bode Sunmonu; and Pa Olufemi Ojo.  Chief Dapo Ajayi;  Sir E A O Akintade and Mrs Yejide Ogundipe, who is a lawyer, are also members.

A recent controversial statement issued by Alhaji Olanusi has, however, created dissension within the ‹faction.›

“This is because the said Chief Akande is on the pay roll of Ondo State governor and Baba was part of the reconciliation committee that met with the party leadership in Ondo State in July, 2019 at Heritage Hotel Akure, where it was agreed that the party executive in Ondo State be dissolved.

“But up till this moment, the governor through some of our leaders have been blocking the dissolution that was jointly agreed on in the presence of Senator Bola Tinubu, our national leader, Chief Segun Osoba; Chief Bisi Akande; Chief Pius Akinyelure; Dr Kayode Fayemi, the governor of Ekiti State and chairman of Nigeria Governors’ Forum and Pastor Oluwajana the South-West chairman of All Progressives Congress.››

It was a resolution that has since backfired as the likes of Dr Abraham and Chief Oke have dissociated themselves from it. Certain leaders across the three senatorial zones had spoken in similar manner.

Abraham said the attack on Chief Akande was frivolous and reckless.

‘’I personally called the leader of the Unity Group, Alhaji Ali Olanusi, to ascertain whether it was true that the former Osun State governor was on the payroll of Governor Akeredolu, but he gave no genuine explanation.

“The allegation against him is unfounded, frivolous and lacks any credibility. This was not discussed at the Unity Forum meeting which I attended.

“I urge the party leaders, who passed the vote of no confidence, to publicly apologise to Akande because he is forever our pride in Yorubaland and Nigeria at large.’’

Abraham advised the leadership of Unity Group to join hands with the Akande-led Reconciliation Committee if truly it was committed to unity and peace in the Ondo APC.

Despite its setback as a result of the attack on Chief Akande, which courted the anger of the party chieftains in the South- West, the group has vowed to frustrate the second term aspiration of Akeredolu.

Investigation revealed that a seven-man team has been put in place to screen the aspirants within its fold to pick a formidable aspirant to join battle with Governor Akeredolu for the ticket.

Rumour is rife that the seven-member panel has since settled for Ife Oyedele because of what those pushing his interest believe to be the clarity of his manifestos and displayed ability on how he will attain the goals.

Alhaji Olanusi, in an interaction with journalists, however, denied claim of the adoption of Oyedele.

‘’No candidate has been picked by Ondo State APC Unity Forum. Everything you have been reading on social media since last week about picking of candidate is fake.

‘’The fake rumour is coming from the camp of our major opponent, who is already jittery with our unity of purpose. They have been dropping different names per day from the Unity Forum just to create confusion and disaffection.

‘’We are aware they have been monitoring events in our group and we already know their game plan. The committee is still working at the moment.

‘’We thank the good People of Ondo State for their interest in Unity Group. The Eagle shall land soon and shall land safely,’ he said.’

Checks by Sunday Tribune revealed that Governor Akeredolu has  told his confidants that he was no longer bothered about the perceived belligerence of the group,  after its disapproval  of the National Reconciliation Committee led by Chief Akande.

The Ondo State governor has assured his supporters not to be apprehensive as he declared that he would pick the party’s ticket and ultimately win a fresh mandate.

He said:’’ The members of the group did not support me during my first time and l would not need their support during my reelection campaign. We will fight them no matter their age. How could a man of over 70 years be ganging up against a performing government? We will win with or without them.”

‘’Those criticising us are blind and do not deserve to be pitied. lf there is an election that is devoid of shenanigans, l will win hands down.

‘’We will meet at the primaries. They are no match to me. I will win the primaries. We have delivered and the people on our side are more than those with them.

‘’lf we go for an election today, we are sure of having over 70 per cent votes across the state. So, we are at home with the majority of the people in the state. They should congratulate me after winning and also join our government and if they win I will also congratulate them.’’