Features
By Suzy Oruya - Onitsha with additional report by Bayo Alade On Jul 10, 2016 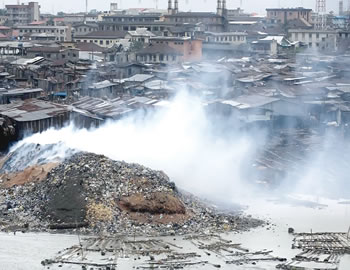 IN May, a report by the World Health Organisation (WHO) indicated that Onitsha in Anambra State is the most polluted city in the world. Three other Nigerian cities, Aba, (number six), Kaduna (number five) and Umuahia, (number 16) also featured in the top 20 of the unenviable list.

According to the WHO’s Global Urban Ambient Air Pollution report, “Of the 3,000 cities in the WHO’s air quality database, the most polluted at the time of measurement was Onitsha, a fast-growing city in Nigeria, which recorded roughly 30 times more than the WHO’s recommended levels of PM10 particles.

The WHO report stated further that a study of Onitsha’s water pollution “found more than 100 petrol stations in the city, selling low-quality fuel, many rubbish dumps, fuel spills along with high levels of arsenic, mercury, lead, copper and iron in its water.”

It also noted that the city’s metal industries, private hospitals and workshops were heavy polluters emitting chemical, hospital and household waste and sewage.

The WHO report also said, “The level of pollution in Onitsha is getting increasingly serious. It is difficult to get accurate measurements in Africa. You can get super-high readings, but ideally the measurements should be done over a year to include different seasons and times of day. The reading in Onitsha may be representative but not altogether reliable.”

To many people, the WHO report did not come as a surprise. Onitsha is highly populated, having doubled its population to over one million people within a few years; it is also noted for commerce. Its markets are so big they rank among the biggest in the West Africa sub region. There is the popular Onitsha Main Market (the largest market in West Africa), followed by Bridge Head market, Ochanja market, Mgbunka Obosi market, Ogbaru main market, Building materials market, Osa-Okwodu market, among others.

Apart from these major markets, Onitsha also has up to about 20 other smaller markets making it the city with the highest number of markets in the whole of Anambra State.

As a result huge garbage dumps litter the whole city, especially around the markets where open air burning of refuse often takes place, thereby contributing to the pollution. Sometimes, the garbage spills over from the markets to motor parks and at just any available open space.

For those who want to live in an exciting, affordable and vibrating city as a result of cheap housing, Onitsha happens to be the ideal place.

Despite the efforts by the state’s ministry of environment, the garbage is hardly taken care of, even as residents often blame the ministry for not being alive to its duties. Most of the time, it seems the ministry is simply overwhelmed by the daunting task of keeping the city free of garbage.

According to a ministry official who would not like to be named because he was not authorised to speak officially on the matter, “despite sanctioning those who fail to keep their environment clean and take care of the rubbish they produce, yet garbage seems to have made a home in Onitsha.”

Although, the present administration of Chief Willie Obiano has been rated high in its efforts at keeping the state safe as crime has reduced considerably in Onitsha, especially around the famous Upper-Iweka Road and other areas, keeping garbage off the street had been a big headache.

Thankfully, the state government has been working hard to ensure steady evacuation of garbage and to discourage burning of refuse; however, more needed to be done as the inner streets had largely been neglected. In some areas, refuse had even blocked the roads, making it difficult for motorists, motorcyclists and even passers-by to have smooth passage.

Onitsha’s traffic situation is also said to be one of the worst in Nigeria. In 2013, two people died of heat exhaustion after a six-hour gridlock on the city’s bridge over the River Niger. Cars and trucks releasing fumes from burning low-quality diesel often pollute the air even as the air often stinks of burning waste from rubbish dumps, coupled with smoke from old ships on the River Niger and discharges from the numerous metal workshops in the city.

However, there are some people who fault the Onitsha ranking as the most polluted city in the world. Some point to the fact that China, well known for its air pollution problems, however, had only one city on the list – Shijiazhuang.

A respondent on twitter by the name Nekky while reacting on the story online said:”I’m carrying out a research on air pollution at Onitsha; Please which areas in Onitsha are polluted by open waste burning?”

Solomon Okechukwa, a state government official, agrees that there is pollution in Onitsha but does not believe that it could be worse than that of Lagos. “We know pollution is very bad here. But (the pollution in) this city must be much better than Lagos,” he said.

There is, however, cheery news about positive steps being taken by most polluted cities to combat the problem. According to Assistant Director General of the WHO in charge of Family, Women and Children’s Health, Dr. Flavia Bustreo, “air pollution is a major cause of disease and death” but added that it was “good news that more cities are stepping up to monitor air quality.”

Why they say Buhari is sectional

How YPF, IOO partnered to train 60 youths on paint production