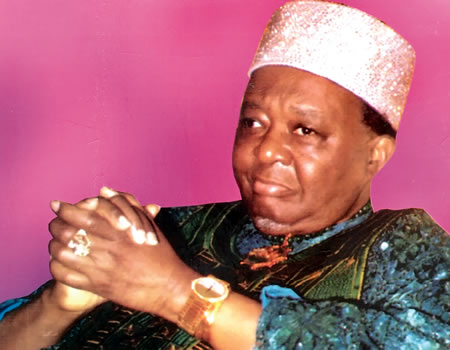 Is an Oba a god or should an Oba see himself as a god? What does language use say about an Oba and his reign? What role do rituals, politics and personal relationships play in the overall assessment of the reign of a monarch? These and other questions are answered in Reflections on the life and times of Oba Okunade Sijuwade Olubuse II edited by Professor Muib Opeloye and Dr Jare Oladosu.

It is exactly two years today that Oba Sijuwade joined his ancestors. Questions on who the late Oba Sijuwade was and what legacy he left behind are adequately answered in the book which is, actually, a collection of some of the papers presented at the one-day colloquium organised by the Institute of Cultural Studies, Obafemi Awolowo University, Ile Ife on 28 July 2016 to mark the first anniversary of the transition of the Oba. The 182-page book is a celebration of the late royal father and a rare close -up on his personal and public engagements that were not visible to the outside world.

With contributions from prominent scholars and accomplished public administrators, the book is divided into four parts starting with papers that x-ray the personal life of Oba Sijuwade, followed by those that put his reign in historical context. The third part of the book is on the political and religious ramifications of his reign, and, the last part on the Oba and administration of Ife kingdom. Contributors include Professor Biodun Adediran of the History Department, Obafemi Awolowo University, Ile-Ife; Dr Olatokunbo Awolowo-Dosumu, a former Nigerian Ambassador to The Netherlands and Executive Director of the Obafemi Awolowo Foundation; Professor Jacob Kehinde Olupona, of the African and African American Studies, and professor of African Religious Traditions at the Harvard Divinity School, Harvard University, USA; Senator Femi Okurounmu, among others.

In the book’s foreword, Professor Gbemisola Adeoti, Dean, Faculty of Arts, OAU, notes that the reign of Oba Sijuwade enhanced the profile of the Ooni and traditional institutions in national affairs while also greatly impacting the ancient city of Ile-Ife.

Adeoti opines that while the late Arole Oodua’s 35-year reign on the spiritual and secular affairs of Ile-Ife can be regarded as short, many significant things happened and many were made to happen by Oba Sijuwade as he stoutly stood at the centre of Ife affairs. Adeoti, while noting that there is so much to learn by the living from the dead, added that the book and its themes are so appropriate at this point in time, particularly for the Yoruba people.

The book’s Part One has the title: Okunade Sijuwade Olubuse 11: Up Close and Personal, examining the private lifestyle of the Oba. The first piece in this part is by Professor Olupona who writes on Ooni Sijuwade Olubuse 11: The Magnificient: A Renaissance Man and a Lover of Knowledge. Olupona describes the late Ooni as Olubuse, the magnificent to reflect on many of his attributes, admitting that: “On his ascension to the throne… he was charged with a specific mission for his people, and he came, he saw, he conquered, and ultimately, departed, leaving his kingdom more secure and peaceful than how he met it.”

The don discloses that just a year before the Ooni’s transition, he approached him to allow his biography to be written. Was it written? Olupona explains: “Our conversation was propelled by my realization that here was a king and a man who had seen it all but whose exploits and deeds were only occasionally heard during conversations with him. I thoroughly enjoyed his intermittent exposes on what his life was as a prince, a businessman and a king. While we love to hear this type of oral stories, my concern was that they needed to be written to ensure they could be passed on for posterity… We agreed that a biography should be written, but sadly he completed his transition before the work could be carried out.”

Mohammed Ayodeji Ademilokun’s contribution is next. The paper, titled Olubuse Eriogun: A Biographical Account of the Life of His Imperial Majesty, Oba Okunade Sijuwade chronicles the early years of the future king, particularly his working years before delving into business, which then catapulted him into the class of the super rich. The contributor also takes a look at the late royal father as a family man and humanist. This contribution is competently followed by Morufu Bukola Omigbule’s Travails and Prospects of Ife Ritual Performances: A Tribute to Ooni Okunade Sijuwade; Ladapo Folorunso Oladeji’s The Language of His Imperial Majesty; and, lastly, Kunle Olajide’s The Omoluabi Essence of Olubuse Oba Okunade Sijuwade.

Omigbule’s contribution is, in part, a cross cultural interrogation of who the Ooni is in the age of globalisation. Is the Ooni an orisa (god), igbakeji Orisa or just a pure mortal with all the vulnerabilities of man? He submits that while the Ooni is perceived as “God” in Brazil, Cuba and Trinidad and Tobago and his acolytes call him “Kabiyesi  Alase Ekeji Orisa”, Oba Sijuwade evinced the contra-belief that “there is only one God and that is the Supreme God on High, Olorun.”

In Ladapo’s submission, Oba Sijuwade “was an articulate king who made use of impressive diction, appropriate idiomatic and figurative expressions, extensive allusions, oratorical language, gestural language, language of humility, tributes, royalty and several other commendable linguistic etiquettes that confirm him to be an adroit bilingual communicator with royal splendor and admirable ease in communicating in English and the Yoruba languages.” While the writer’s descriptive analysis of Oba Sijuwade’s use of language fills a major gap in knowledge, Ladapo holds that it “provides the platform for more researches on royal idiolects in Nigeria.”

In describing the late Ooni as an ‘Omoluabi’ with a spirit of service, Kunle Olajide recollects that the then Prince Sijuwade was summoned by Ife people from the peak of a thriving international business empire in 1980 to ascend the throne of his forefathers.

“He wholeheartedly accepted the responsibility and brought grandeur, panache, splendor and humility to the throne. His reign over the most important ancestral kingdom in Yorubaland for 35 years was very colourful and eventful, though not without its challenges.”

Olajide explains that the Ooni, in pursuit of his goals of promoting national unity, initiated the idea of The Conference of Traditional Rulers of Nigeria, believing that the traditional institution could be used to engineer national unity. Through Olajide, we are able to know that the late Ooni had an idea of the kind of person his successor would be: “When I was alone with him beside the pool, I expressed anxiety about a worthy successor to him ….He waived off my anxiety with a smile and calmly replied that God would raise a more capable successor…”

The contributions of the late royal father to the enthronement of permanent peace between the Ife and Modakeke people is rigorously interrogated by Adesoji and Arogundade tracing the crisis from the pre-Sijuwade years though the several peace efforts to the granting of beaded crown to the Ogunsua of Modakeke as an Oba on 5 September, 2009 by Ooni Sijuwade and presentation of Staff of Office by then Osun State Governor Olagunsoye Oyinlola.

The third part focuses on the late monarch’s political and religious activities with Senator Femi Okunrounmu’s contribution explaining his efforts at promoting Yoruba unity, while Dr Olatokunbo Awolowo-Dosumu brings to the fore Oba Sijuwade’s commitment to the Obafemi Awolowo legacy. It is Dr Awolowo-Dosumu’s conviction that “Oba Sijuwade’s commitment to the Awo legacy stemmed, not only from loyalty in friendship, but also from a strong conviction that it was the right thing to do.” She explained that Chief Obafemi Awolowo and Oba Sijuwade, happened to be friends, “whose hallmark was a deep and abiding loyalty…A friendship that saw both great men through good and bad times, and as they attained prominence, their appreciation of true friendship probably became profound, their friendship endured. That has to be an eloquent testimony to the genuineness of their relationship.”

Dr Awolowo-Dosumu also highlights the several commitments of the late monarch to the unity of the Yoruba nation through the Yoruba Unity Forum which was championed by Chief (Mrs) Hannah Idowu Dideolu Awolowo, Oba Sijuwade, Bishop Bolanle Gbonigi and other notable leaders. While holding that Oba Sijuwade’s commitment to the sustenance of the noble legacies of Chief Awolowo was total, Dr Awolowo-Dosumu expressed the optimism that the younger generations of Nigerians would continue to learn from, discover and acknowledge the trail blazing roles of these heroes and heroine.

Muib Opeloye’s contribution: “Oba Okunade Sijuwade as an avid Promoter of Religious Peace and Harmony” completes the third part. Here, Muib, who is one of the two editors of the book, documents the Ooni’s role in promoting peace and harmony in Ife, Yoruba land and Nigeria in general.

The final part focuses on the Ooni and the administration of Ife kingdom, with Adisa Ogunfolakan writing on Oba Sijuwade’s reforms in Ifeland, while Bashir Ishola Awotorebo’s emphasis is on the Ooni as an astute administrator in Ife kingdom. The impact of Oba Sijuwade’s reign on tourism in Ile-Ife is the focus of Segun Bamigbetan Baju’s contribution.

In all, the well-edited book, competently structured with a cover of gold and purple does great justice to the epochal life and times of Oba Sijuwade. As Adeoti notes in the foreword, it is an important documentation of an era in the life of a people, a city and the monarch who was the driving force of its recent history.

Every Nigerian must be interested in unity of the country—Sambo

Understanding the man in the Synagogue