No SARS personnel will be part of SWAT team ― Police

•Five things to know about SWAT 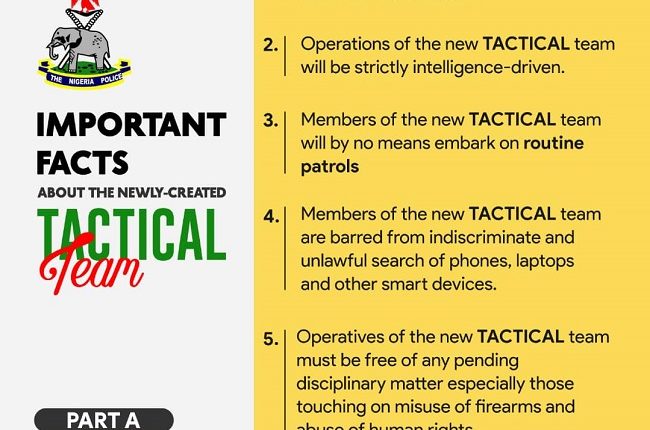 The Nigerian Police Force on Wednesday came out with five important facts about the newly-created Special Weapons and Tactical Team (SWAT), saying no personnel of the defunct Special Anti Robbery Squad (SARS) will be part of the new SWAT.

In a series of tweets by the police through the Force Public Relations Officer, Frank Mba, the police also announced that members of the new outfit will not embark on routine patrols and are barred from searching people’s phones, laptops and other devices. 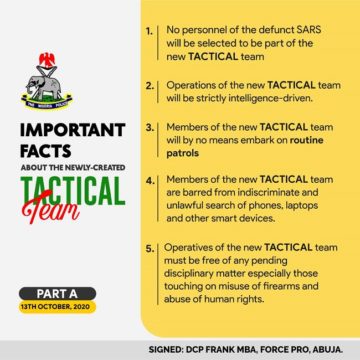 According to the police in the Tweet entitled: “Important Facts about the newly-created tactical team,” the police highlighted the five facts to include: 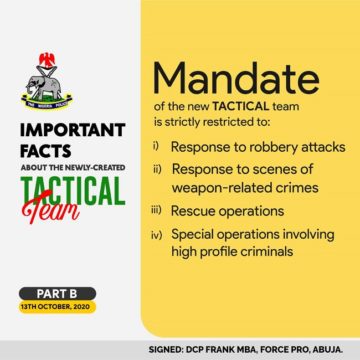 The force also added that the mandate of the new team include:
1. Response to robbery attacks
2. Response to scenes of weapon-related crimes
3. Rescue operations
4. Special operations involving high profile criminals.

The party also said that immediately the Caretaker/Extraordinary Convention Planning Committee was put in place after the NWC’s dissolution, the crises that had characterised its affairs were laid to rest…No SARS personnel  No SARS personnel

His son, Aminu Shehu Idris, confirmed in an interview with the Tribune Online that his late father who was appointed on 15th February, 1975 and spent 45 years in the throne died on Sunday after a protracted illness…No SARS personnel  No SARS personnel

A Kano based industrialist, Chief Kalu Ogbonnaya, has advised the Federal Government to take necessary steps to stimulate the nation’s economy to prevent a recession post COVID-19…No SARS personnel