Asks Oshiomhole to leave Saraki out of APC troubles 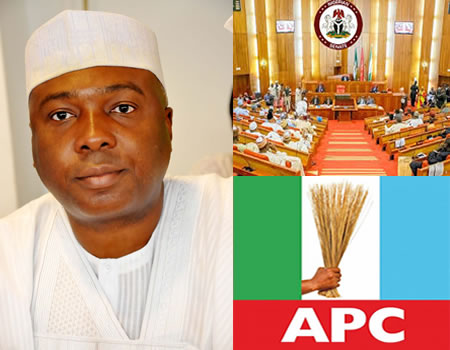 The Senate caucus of the Peoples Democratic Party (PDP) said on Tuesday that outsiders will play no role in electing the Senate President of the 9th Senate which will be inaugurated in June.

A statement jointly signed by the Senate Minority Leader, Biodun Olujinmi and Chairman, Senate Committee on Federal Capital Territory (FCT), Dino Melaye said that Senators of the ninth Senate would have the responsibility of choosing their leaders.

The statement also warned the Chairman of the ruling All Progressives Congress (APC), Adams Oshiomhole and his party men to leave the incumbent Senate President, Dr Abubakar Bukola Saraki, out of the schemes in choosing the presiding officers of the Ninth Senate.

The PDP caucus stated that it has observed closely as the contenders for the various Senate leadership posts in the APC have allegedly been sponsoring various publications to drag Saraki into their schemes.

The PDP senators said: “Let it be known that no matter the mischief being sponsored by these spineless people, Dr Saraki knows that it is the duty of all Senators in the Ninth Senate to elect their Senate President and other leaders.

“Nobody from outside the Senate has such powers. It is also the right of every Senator to aspire to that position as stated by the constitution.”

The statement reads: “The PDP Senate caucus warned that such surreptitious attempts to drag Saraki into the issue that does not concern him would not augur well for the smooth take-off of the next Senate and could only create suspicion and ill-will among the incumbent Senators and the incoming ones.

“Such people should know that Dr. Saraki is not interested in their plots, schemes and manipulation. His concern now is to continue to provide leadership to the Eighth Senate and to ensure that the Senate achieves as much as it is possible in the remaining two months of its tenure.

“It is obvious that many Senators and even Senators-elect still defer to Saraki. And this is understandable because he is a national leader of the PDP. He is a respected Senator who has also provided solid leadership for the Senate. So, those who are afraid of his influence should find a positive way to deal with that, not sponsoring falsehood in the media.

“Last week, PDP Senators paid Dr. Saraki a visit in his home as a way of encouraging him and in recognition of the personal sacrifice that he has had to make for providing strong and purposeful leadership to the National Assembly, for protecting the independence of the legislature and judiciary, separation of powers, inclusiveness in a multi-ethnic and multi-religious Nigeria and working for the creation of a conducive environment for business to thrive. Those who are not sure of their grounds in their quest for Senate leadership are busy putting a spin on that visit.

“Let it be known that no matter the mischief being sponsored by these spineless people, Dr. Saraki knows that it is the duty of all Senators in the Ninth Senate to elect their Senate President and other leaders.

“Nobody from outside the Senate has such powers. It is also the right of every Senator to aspire to that position as stated by the constitution. He has benefitted from this practice of Senators within the chambers exercising the right. He is conscious of this fact and will not be a party to any plan to seize or interfere with the process of evolving the leadership of the Ninth Senate.

“We, therefore, urge the APC gladiators and their handlers to leave Saraki out of their schemes and manipulations. They should go and concentrate on how to convince the Senators-elect and ensuring that the election of the next Senate President takes place in a conducive atmosphere with a view to strengthening the institution and making it perform its constitutional roles, without any hindrance.”