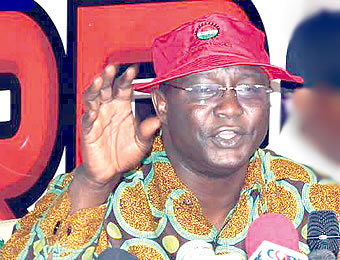 President, Nigeria Labour Congress (NLC), Comrade Ayuba Waba; his counterpart in Nigeria Union of Local Government Employees (NULGE), Comrade Ahmed Labbo, and the Association of Local Government of Nigeria (ALGON) on Wednesday demanded full autonomy for local governments in the country, saying that an autonomous local government system would provide essential services to the grassroots community and also address the security challenges in the country.

The NLC president, Waba, who observed that the local government administration in the country was currently faced with numerous challenges and were affected by an inability to pay minimum wage, said this was so because they were not autonomous as the chairmen and other officers were handpicked and, therefore, under the control of the states.

“Local government system in the country is not autonomous, their leaders are handpicked,” he said.

“We stand for full autonomy of local governments as the third tier of government,” he declared.

Waba argued that by granting autonomy to local governments, it was not only a panacea to tackling corruption but also the best way to address the security challenges in the country.

“To deal with corruption in Nigeria is to address the issue of local government autonomy. It is also the best way to address the security challenges facing the country,” Waba argued.

“When local governments in my state and in many states had full autonomy, development and projects could be seen everywhere.

“Kaka Mallam Yale invited President Obasanjo to commission over 100 projects in Kodugs LGA as he was awarded the Best Local Government Chairman in Nigeria at that time,” NLC president recalled.

Waba condemned the continuous increase in taxes and tariffs in the country, describing such as continuous exploitation of the masses, pointing out that it was the responsibility of the government to bring down inflation and not fuel it.

“As we continue to call for local government autonomy, we would continue to push for good governance,” he pledged.

Waba, while consoling the NULGE over the death of its immediate past national president, Comrade Khaleel Ibrahim, called on delegates to do their best offer solid and stronger platform that can represent the country, declaring: “Together we shall overcome.”

“I wish for a successful conference. The election should not be a do and die affair. We will ensure a free, fair contest. In the spirit of comradeship, let’s have a peaceful conference,” he charged.

Also speaking, NULGE president, Comrade Labbo, while also calling for full autonomy for local government administration in the country, lamented that several efforts made by the body in between the period of the 7th and 8th National Assembly, through rallies as well as reaching out to critical stakeholders, lamented that the “the immediate two constitutional amendments exercises failed to give the desired hope to the system.”

Labbo, who said available information confirmed that a sponsored elite group in the present National Assembly had sponsored a Bill to deregister local government as the third tier of government in the country, warned that allowing such Bill to scale through the second stage would mean marginalizing the rural dwellers and making it more difficult for them to be closer to government at the centre.

“This is not a good development as it will further endanger the rural-urban drift with its adverse security challenges,” he said.

Labbo, while calling on all the progressive parliamentarians as well as opinion leaders and traditional leaders to see the elite as a group of anti-people and by so doing call them to order, pleaded with the National Assembly to kill the said Bill at the appropriate stage.

“Presently, the 9th Assembly has commenced another process of constitutional amendments, and I would like to make a special appeal to all parliamentarians as well as other stakeholders to see local governments as a catalyst for societal development and give its full autonomy in line with the aspiration of our founding fathers,” he said.

Hon. Alabi, who spoke for ALGON, called for partnership between the body and NULGE in order to bring about the devolution of powers and true federalism in the country, maintaining that concentration should be at the local government, where he said the best brains resided, adding: “Federal to me is infinitesimal.”

This was just as he asserted that Morocco, which gave full autonomy to its local governments, was “better for it.”

The local government boss, who also condoled with NULGE over the death of its former president, Comrade Ibrahim, expressed the assurances that both unions would work together to achieve the desired goal.

Minister of Labour and Employment, Senator Chris Ngige, who was represented by Mr Nnamdi Enuah, said the Federal Government had done remarkably well over the years by way of providing the enabling environment for effective trade unionism to thrive in the country.

The minister, while noting that delegate conference should as a norm conform to international best practice, however, said that delegates should note that “whatever you do here today in the course of this delegate conference, by way of the quality of persons you put in leadership positions, will produce impacts or results not just for your union, but also for the entire nation.”

He, therefore, called on all offices that would emerge in the elections to be held to be magnanimous in victory and as well endeavour to carry everyone along at all times in order to build a better, united and progressive union.

The British Parliament at the Westminster Hall held a debate on ‘e-petition 554150, relating to Nigeria and the sanctions regime’ on Monday. The government of the United Kingdom has however responded…NLC president  NLC president

The surprise visit made on Friday night by the leaders of the ruling All Progressives Congress (APC) to former President Goodluck Jonathan at his residence in Abuja triggered a stir in the major political camps, resulting in at least four possible theories..NLC president  NLC president

Only PDP can satisfy yearning of Nigerians for good governance, Wike declares