Only PDP can satisfy yearning of Nigerians for good governance, Wike declares 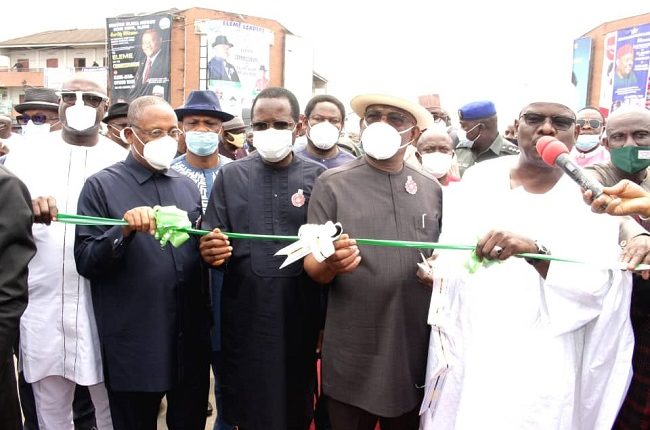 Rivers State Governor, Nyesom Wike has declared that Nigerians have increased their yearnings for good governance, improved economy and developmental projects that PDP has continued to provide in the states that it controls.

He made the declaration at the commissioning of the 11.53 kilometres Agbonchai-Afam road, connecting Eleme and Oyigbo Local Government Areas and performed by the former Senate Majority leader, Senator Mohammed Ali Ndume on Wednesday.

The Governor stated that the hope of Nigeria depends on the Peoples Democratic Party.

He stated that the PDP is working in Rivers State and in other states that are controlled by PDP urging Senator Ndume and the APC to respect the wishes of Nigerians who are determined to return the PDP to power in 2023 to provide them dividends of democracy.

“To our special Guest of Honour (Ndume), he should not be angry because we are taking over from them. When they came, we didn’t fight, they took over. Now, that Nigerians have decided to change them, let them also handover to us as quickly as possible without any fight.”

The governor said he is satisfied to have fulfilled the campaign promise he made to Eleme people that he would reconstruct the once deplorable Eleme-Afam road saying that the completed road now serves as an alternative route to neighbouring states.

He also stated that his administration has completely rebuilt the Government Secondary School in Onne Town with the one in Eteo reaching finishing level.

“Today, we are in Eleme commissioning Agbonchia-Afam Road. This road traverses two Local Government Areas. Nobody will say that we have not come to Rivers East Senatorial District to do anything.

“As I speak to you now, by the end of this month, we are coming back to Alesa Secondary School and Ascension High School. Those schools will be rebuilt completely.

“And because you gave me a good, reliable and trusted person who is my Commissioner of Finance, there is this other road here that needs attention, I will reconstruct it.”

The former Senate majority leader, Senator Mohammed Ali Ndume, who inaugurated the 11.53 kilometres long Eleme-Afam Road said he felt truly humbled to perform the task and be part of what Governor Wike is doing in his state.

Senator Ndume described Governor Wike as a true nationalist who is an important voice in national affairs across parties, and always stands out as one who speaks the truth to power courageously.

“Governor Wike is my very good friend, a trusted leader, a very honest person. One thing we have in common is that, as a leader, you must stand out and speak the truth even if you’re alone and Wike is known for that.

“There is new hope for the state and he is Wike. Now, Rivers is not only becoming a Garden City again but it is becoming a Golden City. May God continue to give you (Wike) the strength.

“And from today, know that you’re a leader in this country. If you’re not a friend and a nationalist, I will not be here, Fayemi will not be here and many other APC Governors.

“You’re one of the true Nigerians that I ever know. And if we have people like you that speak the truth to power, Nigeria would have been better off for all of us.”

Speaking further, Senator Ndume commended the Governor for his feat in the fight against insecurity in Rivers State that has given the people the liberty to come out to participate in such event without fear.

“You don’t know what you have until you lose it. What you’re doing here, we will never try it in Borno State. You can’t invite people like this and everybody, comfortably, listening to somebody speaking without looking around. So, we have to thank God.

“Honestly, let me say here that Nigeria is lucky to have not only Rivers State but Rivers people. South-South, particularly Rivers people are the great people of Nigeria. What you’re giving to this country; if Rivers is not there, Nigeria will not be there.”

Rivers State Commissioner of Works, Elloka Tasie-Amadi, said prior to this time the road was a nightmare replete with all the negatives that derive from such a situation. But, today it is something that brings joy and with it, the obvious tangible and psychological benefits that come with any good transportation access to any location or locality.”

The British Parliament at the Westminster Hall held a debate on ‘e-petition 554150, relating to Nigeria and the sanctions regime’ on Monday. The government of the United Kingdom has however responded…Only PDP can satisfy  Only PDP can satisfy

The surprise visit made on Friday night by the leaders of the ruling All Progressives Congress (APC) to former President Goodluck Jonathan at his residence in Abuja triggered a stir in the major political camps, resulting in at least four possible theories..Only PDP can satisfy  Only PDP can satisfy