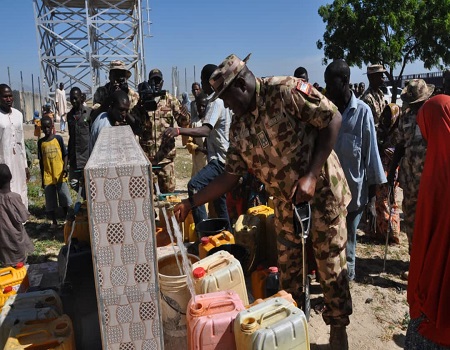 The Nigerian Army on Thursday inaugurated three water projects to enhance access to potable water in rural communities of Borno.

News Agency of Nigeria (NAN) reports that the projects were executed in collaboration with the 7th Division of the Nigerian Army, Maiduguri and Nigerian Army Officers’ Wives Association (NAFOWA).

The projects include; installation of solar motorised boreholes, tabs and surface tanks at Pampomari Bypass, Wadiya-Chulumri and Auno communities and Kaga Local Government Area of the state.

He said that the army had adopted proactive measures to enhance its humanitarian response in conflict-prone areas and execute infrastructure development projects to communities in the northeast.

ALSO READ: Bauchi to embark on renovation, construction of schools next year

“It is part of the Civil Military Cooperation (CIMIC) programme, we want our civilian counterparts to understand that the army cares for them even beyond fighting the insurgents.

“Troops of Operation Lafiya Dole (OPLD) had also established a bread and sachet water plants at Askira Uba, to support the troops and host communities in a bid to extend our humanitarian gesture to the society,” he said.

Ibrahim called on the people to protect other facilities provided for them in their respective communities.

He, however, warned the people against collaboration with the insurgents, stressing that the military would not condone acts capable of scuttling successes recorded in the counter insurgency campaign and peacebuilding process.

Bukar Mele, one of the community members, lauded the gesture, adding that it would go a long way to improve their social and economic wellbeing.

Mele pledged the community’s support to the army for the successful execution of the counter insurgency campaign.

Nigeria loses over $50b annually to postharvest waste