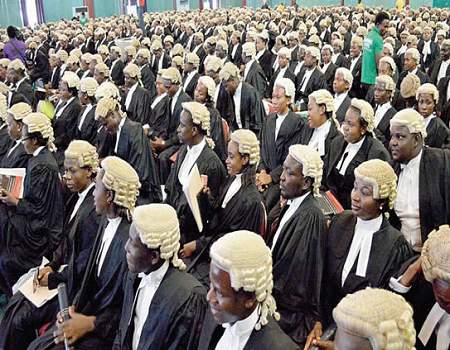 The Council of Legal Education, on Tuesday, called a total of 4, 456 law graduates to the Nigerian Bar, following their success at the August 2019 Bar final examination.

Speaking at the call to Bar ceremony held at the headquarters of the Nigerian Law School in Abuja, the Director-General of the Law School, Prof Isah Hayatu Chiroma (SAN) said out the number of candidates called to the Nigerian Bar, 147 candidates came out with first class.

The Law school boss said 741 candidates graduated with second class upper, 2, 247, second class lower, while 1, 321 came out of the Law School with a pass.

Chiroma assured that the Nigerian Law School will remain the gate keeper of the legal profession and will continue in upholding the standard and integrity of the Bar.

He said the Council of Legal Education was established by the Legal Education Act 1962 to provide vocational training for law graduates aspiring for call to the Nigerian Bar.

Chiroma also stated that the Nigerian Law School, which is the training arm of the Council of Legal Education is a multi-Campus institution, with headquarters in Abuja and Campuses in Lagos, Enugu, Kano, Yenogoa and Yola.

“From all these locations, we train over 6, 000 students annually,” he said and added also that the Nigerian Law School, which is about 56 years of existence has had uninterrupted session as there has never been any incident of a closure of the Institution on account of student unrests, strike action by staff or for any other reason.

Chiroma disclosed also that the Nigerian Law School had contributed to the training of the legal man-power for some African Countries and enjoined the “New wigs” to adhere strictly to the norms and ethics of the legal profession.

In his speech, the Chief Justice of Nigeria (CJN), Justice Ibrahim Tanko Muhammad congratulated the new wigs that went through sound and rigorous training at the Law School and were found worthy in both character and learning by the Council of Legal Education.

The CJN told the newly called lawyers that the legal profession is known for its sanctity, integrity, honesty, objectivity, justice and the rule of law and charged them to exhibit the highest level of professional ethics and decorum.

“You must be steadfast and preserve the honour and dignity of the legal profession. I urge you to be courageous and be bold enough to thread new grounds,” Justice Muhammad said.