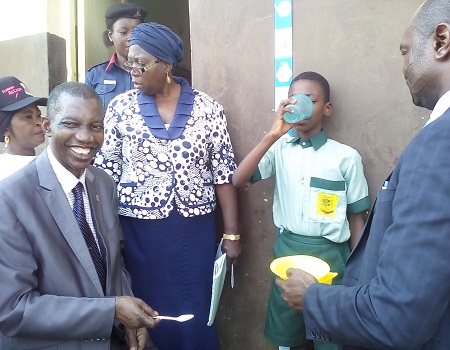 The Federal Government of Nigeria and Oyo State government on Tuesday officially kicked off the second round of 2019 school-based deworming exercise for School-Age Children (SAC) aimed at protecting about 2.1million students against Neglected Tropical Diseases in the state.

This was disclosed by the Programme Officer, Neglected Tropical Diseases (NTDs) Public Health Department, Federal Ministry of Health, Mrs Rita Urude while speaking during the flag-off of the exercise at St Michael Primary School, Yemetu, Ibadan, on Tuesday.

She stated that the exercise is expected to be carried on pupils between five and 14 years of age and through five days,

The exercise which would take place in 21 local government council areas in the state according to Urude, is being partnered by a Non-Governmental Development Organisation (NGO), Evidence Action, in the area of technical and financial support, and She said “Coordinated Deworming campaign of this nature requires a collective effort of every stakeholder.

“The Federal Ministry of Health in collaboration with the World Health Organisation have donated three million tablets of praziquantel and 600 tablets of mebendazole to Oyo State. Let me equally assure you that the FMoH will continue to provide technical support as well as ensure that deworming tablets for school-age children are donated to the State Programme.

“This coordinated deworming using school feeding platform no doubt will contribute to a drastic reduction in severe adverse reaction often experienced by children as a result of insufficient intake of solid food during mass administration of medicines with praziquantel tablets in school and communities. It will also contribute to improved coverage of deworming interventions in States.

“This campaign is expected to last for five years. It is important to reiterate that you are not alone in this campaign, as this nationwide coordinated school-age deworming and feeding programme is happening in 36 States and Federal Capital Territory. More than 29 million school-age children is targeted to be treated  for 2019 nationwide.”

While declaring the exercise open, Oyo State Commissioner for health, Dr Bshir Bello, emphasised the need for preventive medicine when he said it has become the focus of the state government.

“We’ll appreciate that all stakeholders in all the 21 local government areas cooperate with officers to ensure smooth exercise to rid our students off diseases.”

A sizeable number of students of St Michael primary School, Yemetu, Ibadan, taking through the exercise to formally kick off the exercise in the state.

Dignitaries from Ministry of health, SUBEB, Ministry of education and other agencies were represented on the occasion.