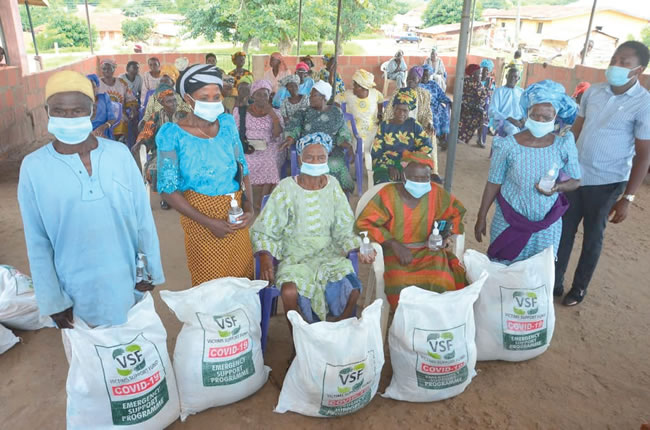 The outbreak of the coronavirus pandemic is having a negative effect all sectors. While many have died from the infection, others are still battling with the virus.

As part of the measures to flatten the curve of infections in Nigeria after the country recorded its index case in February, government all levels introduced different measures at stemming the tide of the disease. Part of the measures was partial or total lockdown of the economy, ban on public gathering and other measures aimed at combating the pestilence.

Answering the call by the government coupled with the negative impact of Covid-19 on the vulnerable people, a non-governmental organisation, New Initiative for Social Development (NISD), supported by the Nigeria Foundation for the Support of Victims of Terrorism also known as Victims Support Fund (VSF) reached out to some indigent residents of Ekiti State in furtherance of VSF 2020 Covid-19 Response Programme.

Considering the level of poverty and lack of government presence in some communities, NISD selected residents of Ijelu-Ekiti, Oye Local Government Area and some remote communities in Ado council area of the state for onward distribution of relief items.

Items in the full pack unit distributed to the vulnerable included one bag of 10kg rice, one 10kg bag of beans, one 10kg bag of garri, 4-litre vegetable oil and two 2kg packets of salt. Also, personal protective equipments (PPE) such as hand-sanitisers and nose-masks were given out and warmly received by the joyous residents and supervised by the Special Assistant to Ekiti State Governor on Civil Society Matters, Mr. Abiodun Oyeleye.

Speaking, the programme manager and acting executive director of NISD, Mr. Ogunlade Olamide Martins, explained that the group carried out a study in selecting the community for the palliatives. He said that the community which made up of largely farmers had been cut off from other towns as a result of bad road network.

According to him, many residents in the community were vulnerable and physically challenged. They had no means of livelihood; the group therefore considered it necessary to reach out to them during the difficult time in the country. He revealed that the materials were donated by the VSF, an NGO committed to helping the disadvantaged in the society.

Martins advised government to design measures through which the people of the community could benefit from its programmes, adding that there was the need for the community to be opened up for agricultural potential to be properly harnessed.

He said, “Ijelu Ekiti was chosen as the benefitting community in Oye Local Government Area for the first batch of distribution for reasons largely connected to the pitiable state of the community. The community being a remote one is completely cut off due to bad road network. Residents of Ijelu Ekiti who are mostly farmers find it difficult to convey their produce from the farm to market places not to talk of moving them to bigger towns. Covid-19 has further aggravated the sufferings of the residents who already suffer from absence of basic infrastructure and social amenities.

“The exercise revealed clearly that poverty continues to be the major problem of Nigeria and that urgent actions need to be carried out by all stakeholders to address the menace. Some beneficiaries expressed the deepening disconnection between the people and government. They advised government to learn from the approach deployed by VSF and NISD in this process for her social support programs where everything is purely on merit and completely apolitical.

“Also, it came out very clearly that there is the need for government to open up the farms within the rural settlements and ensure that buying centres are established. This will reduce wastage of agricultural produce, reduce rural dwellers’ dependence on big town economies and ultimately reduce poverty.”

Commending the organisation for reaching out to his people, the traditional ruler of the community, Oba Omotoyinbo Ajayi, noted that the gestures would help in no small measure to cushion the effect of the pandemic on his subjects and alleviate their sufferings.

Oba Ajayi called on the government and other private organisations to emulate VSF and NISD in giving out to the people, especially at the hinterlands and not only the big cities.

One of the beneficiaries, Mr. Adeolu Ajayi, who spoke after receiving the materials applauded VSF for the gesture and said it would go a long way to feed his family and neighbours.