Latest News
By Osaretin Osadebamwen - Abuja On May 4, 2021 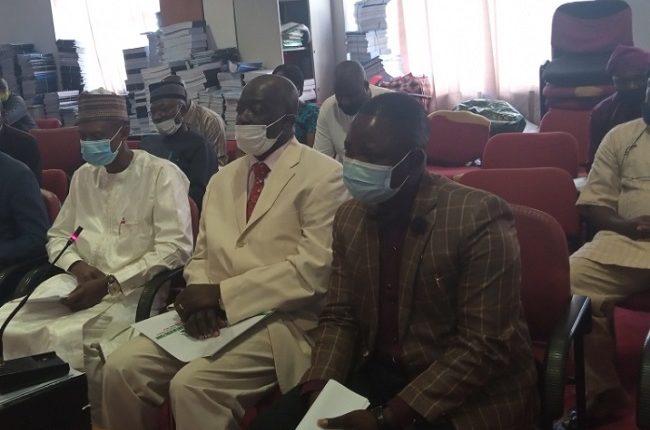 It was a bewildered Senate that was on Tuesday greeted with silence by the permanent Secretary of the Ministry of Finance, Aliyu Ahmed over the illegal withdrawal of N7.5 from the Central bank account of the National Automotive Design and Development Council (NADDC).

The Permanent Secretary was represented by Teslim Akintoye, who said they have no record of the transactions and cannot speak on it.

Chairman of the Senate Committee on Public Accounts (SPAC) Matthew Urhoghide who was visibly angry said the Senate will use this fraud to test the will of the President on his fight against corruption.

He said the office of the Accountant General would have to liaise with the Ministry of Defence (MOD) to get the record of officers who got the loan.

Matthew had said the committee demanded the attention of the Ministry of Finance, Accountant-General of the Federation and that of the NADDC to appear before the committee and say their side of the illegal withdrawal and spending of the N7.5bn of the NADDC.

He maintained that the money was not an amount that could be swept under the carpet especially when the transaction has reached its maturation.

He pointed out that the defunct NAFCON was sold with liabilities and the ministry of finance which handled it worked with the Bureau of Public Enterprise (BPE) to sell NAFCON why were they not paid back.

He told the permanent Secretary that the ministry may have to adopt the submission of the office of Auditor General since his office has no evidence of transactions.

Senator Urhoghide further said that from the documents available to the committee all transactions emanated from the Ministry of Finance and the ‘You don’t come to the parliament to and say you do not have anything to say.’

He recalled that ‘The illegal withdrawal was to fund car loans through a blatant withdrawal and the committee knows that all documents are in the office of the accountant general.

The permanent Secretary through his representatives said, “There is nothing we understand, that the money would be approved by the minister of Finance all records are with the Accountant, Teslim Akintoye said.

Senator, Ibrahim Danbaba, representing Sokoto South said the ministry of finance does not take the Senate panel seriously “I think these institutions are just playing with us. In this letter that was addressed to your ministry, we asked the accountant general to respond through your ministry.

“Unless you are adopting the response of the accountant General, we understand the loans have been not been paid and you are saying nothing,” Danbaba said.

In its response, the office of the accountant general, represented by Alexander Adeyemi said “Our response as documented is that yes there was a withdrawal used to finance approved car financing for some military officers and staff of NAFCON.

“The arrangement was that it will be recovered through the budget office. Bank of Industry (BOI) stood as guarantor, and the BOI is to open a separate book and account to recover the monies” he told the committee.

He said some payments were made but the committee pointed to him that the document he presented was not related to the transaction because it could not have paid back a deal that was not consummated.

The committee also pointed out that it only had the instruction of payment without evidence of transactions which the committee needed to know the whereabouts of the fund.

A member of the committee Senator, Amos Bulus Kilawang was a beneficiary of the loan which he told the Committee.

He the car loan was paid back through withdrawal from his emolument while discharging from the military.

It will be recalled that the query had said, “A total sum of N3,836,000,000.00 (Three billion, eight hundred and thirty-six million naira) was irregularly withdrawn from the 2% National Automotive Council Levy Account with the Central Bank of Nigeria, Abuja in 2 installments of N2,800,000,000 (in 2005) and N1,036,000,000.00 (in 2006) by the Accountant-General of the Federation and the Federal Ministry of Finance as car loan to be granted for the Security Personnel Car Purchase Scheme Loan,” was raised last week.