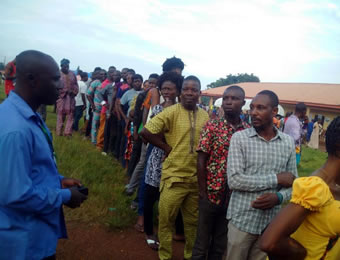 The governorship election in Edo has recorded an impressive turnout with voters arriving at polling stations in large numbers across the state.

The News Agency of Nigeria (NAN) reports that as early as 7.30 a.m., voters were seen in large numbers eager to cast their vote in all the polling centres visited.

It was also observed that the exercise in all the polling stations monitored was peaceful and orderly.

Adequate security personnel were deployed to ensure orderliness at the polling stations.

NAN reports that INEC officials also arrived early with election materials and were getting set to commence the conduct of the exercise.

At Fabiyi Akpata Primary School, Benin, many voters were present, while INEC officials and security agents were seen manning the units and maintaining order.

ACP, PDP, APC and ACPN agents in the six units said they were impressed by the conduct of the election and expressed hope that the exercise would be successful.

Mrs  Angella Akenzua, 68, said she was impressed by the orderliness in the conduct of the exercise, particularly the early arrival of officials and election materials.

Accredidation and voting commenced   at Afuze 1, unit  11, Owan East at 8.30 a.m. with many voters checking their names on the voter register pasted on the wall.

The situation was the same in Oredo Ward 7, New Era Secondary School, as INEC officials and materials arrived at 7 a.m., while armed security personnel were monitoring the proceedings.

But the card readers in the Oredo ward 7 were not functioning well, so also in Ward 2, Unit 6 and Ward 3 Unit 10 in Uromi  Essan North-East Local Government Area.

NAN reports that voting and accreditation had commenced at Apena ward 10,unit 11 and unit 13, and at Iyamho Primary School.

#EdoDecides: Obaseki and wife, Betsy queuing to cast their vote