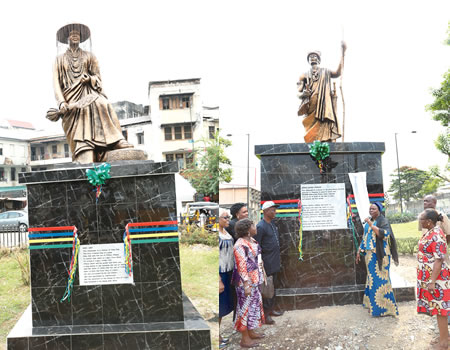 Lagos State Government has demonstrated commitment towards the promotion and development of cultural tourism in the state with the unveiling of statues of the first crown king of Lagos, King Ado and the legendary Prince Olofin Atekoye, referred to as the first migrant from Ile- Ife the cradle of Yorubas to settle in Lagos. The statues were unveiled recently at Ijora Olopa and Moloney roundabout respectively.

The Acting Commissioner/Special Adviser to the Governor on Tourism, Arts and Culture, Hon. Adebimpe Akinsola said “the unveiling of the statues validates Governor Akinwunmi Ambode’s, vision of beautifying Lagos landscape with befitting monuments as the state th anniversary of her creation, tagged Lagos @ 50.”

According to the Acting commissioner, the monument sites will continue to serve as a destination for tourists in need of historical information to enrich their knowledge of the Arts and Culture of Lagosians.

King Ado was the first crowned King of Lagos, son of Asipa, a warrior that came to Lagos from Benin (the capital of present day Edo State). It is of note that the Oba of Lagos has remained in the lineage of King Ado, the first King of Lagos.

Akinsola however, enjoined residents around monuments sites in Lagos State to take responsibility and ownership of the highly important sites. According to her “their cultural and historical value should not be eroded by vandals and miscreants.”

Mr Olurotimi Ajayi of Omodupe Studio, head of the firm that sculptured the statues explained that the fiber glass that form the major component of the statues will last a century if well maintained.

The unveiling was attended by the Permanent Secretary, Ministry of Tourism, Arts and Culture, Mr Jamiu Adewale Ashimi alongside directors and management staff of the Ministry.

NCAC DG mourns Maitama Sule, says he was an embodiment of culture