•Project’s share of Abacha loot not known yet —Official 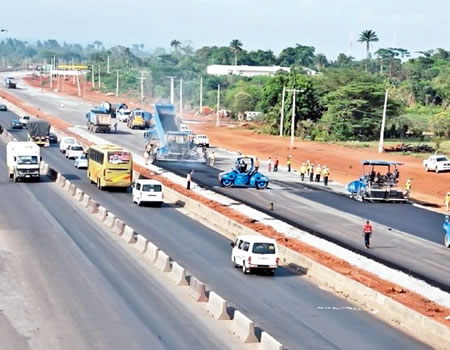 So far, the Federal Government (FG) has approved about N240 billion for the reconstruction of the Lagos-Ibadan Expressway, out of a total of N315 billion which is the project’s contract value, Saturday Tribune has gathered.

The highway, on which wok has stalled over time, connects Lagos, Ogun and Oyo States, and it leads to various regions of the country.

The project has been stalled due to funding problems, change in original construction plan, macroeconomic indices, among others.

The Federal Government had initially made a concession agreement with Wale Babalakin’s Bi-Courtney to rebuild and manage the road for 25 years, but after the company failed to make any progress, the government, on November 19, 2012, terminated the contract.

As a result, former President Goodluck Jonathan’s administration, in July 2013, flagged off the reconstruction of the high and awarded the project to Julius Berger Nigeria and Reynolds Construction Company Nigeria at a cost of N167billion with a completion period of 4 years.

At the initial concession agreement, Bi-Courtney was expected to expand the lanes from Lagos to Sagamu to 10 and six lanes from Sagamu to Ibadan. It was also expected to build trailer parks and five interchanges among others.

However, the completion period was further shifted to 2021 and in meeting up with the new deadline, the Federal Government granted Julius Berger’s request to close the Berger-Kara section of the road for reconstruction.

In 2018, the Federal Executive Council (FEC) approved over N64 billion for an additional work to be carried out on Section I of the Lagos-Sagamu interchange of the expressway project.

The council approved the sum to cover over 43.6 kilometers, which include pedestrian bridges and toll plazas for the section, to accommodate the changing nature of the road.

The then Minister of Power, Works and Housing, Babatunde Fashola, had said: “Since its conception, so many new structures: religious institutions, factories, universities and increased human activities, have come up along that road. The inherited design didn’t provide for these at all. The additional work is also to modify the quality of bitumen, polymer modified bitumen, in order to deal with the heavy cargo that passes through that road.”

He disclosed that the first section was being handled by Julius Berger, while the second section of 84 kilometers was handled by RCC.

Also in 2018, the council approved N105 billion as intervention funds for 44 road projects in the states.

Out of fund, N80.199 billion was approved as revised sum for the second section of the Lagos-Ibadan road project.

The second section was awarded to RCC at the cost of N96 billion with an addition of an approximated N80.2 billion, making a total of N176 billion.

According to Fashola, the review was due to a change in the dynamics of the road.

He said: “The contract awarded to RCC at the cost of N96 billion before is now revised by N80.199 billion to take the total cost to N176.503 billion. The major component is the change of the type of bitumen, the swamps that have been encountered, the depth of the design for the road, which is 1,100 millimeters, roughly about 43 inches of reconstruction from base.

“As you might know, the road is being expanded from two to three lanes on both sides. Also, we are installing Glover leavers, toll plazas and service lanes. All these to accommodate the changes that have taken place, which were not conceptualised when the road was first built.”

The road project is also penciled in as one of the three FG’s five priority projects to benefit from the recently repatriated $311 million loot recovered from the late head of state, General Sani Abacha.

It is, however, unclear the amount that would be set aside for the Lagos-Ibadan road project from the repatriated Abacha’s $322 million loot.

When contacted, the Federal Controller of Works, Lagos State, Mr Adedamola Kuti, disclosed that the contract sum of the project is N315 billion for both sections of the road.

He said the contract value for Section I, handled by Julius Berger is N139 billion while section II handled by RCC is N176 billion.

“I can give you the contract sum but I don’t know the total sum the contractors have received. There are two sections, Section I is N139 billion, while section II is N176 billion. The approved sum by the Federal Executive Council (FEC) is inclusive.

“You know there was a review of the contract, what happened was that we had an initial contract sum then the FEC come up with additional works,” he said.

He explained that the approval for the project came out in 2017/2018, adding that the project is due for completion in 2022.

On the recently repatriated loot, he said this does not add to the contract sum but the fund which is domiciled in the Nigeria Sovereign Investment Authority (NSIA) will serve as a pool of funding for the project.

“The money repatriated is going into the NSIA, our own job is N134/N176 billion whatever is approved, we will go and draw money from the pool. We don’t know how much that is in the fund but it is the fund that is taking care of Lagos-Ibadan, Kaduna-Kano and second Niger bridge.”