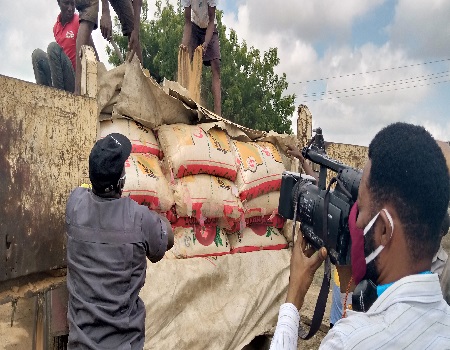 The Customs boss, who described smugglers’ antics as disturbing, said that some die-hard smugglers have also resorted to using tricycles (Keke Napep) and commercial motorcycles to smuggle rice, adding that there is no retreat on the fight against smuggling in whatever disguise or camouflage.

He also said that the joint operations, comprising a patrol team of Nigeria Customs, Nigeria Army, Nigeria Immigration Service, DSS, Nigeria Police Force and other security agencies, within the period of 40 days under review, raided two warehouses at ABAYAWO and ITA-MERIN areas, both in the Ilorin West local government of Kwara State, suspected to stockpile with foreign parboiled rice.

Garba said that the two stores were raided and a total of 450 and 224 bags of foreign parboiled rice of 50kg each, respectively, were discovered to be smuggled into the state.

“It will be recalled that late last month, the Patrol team covering Babanna axis of the Sector in Niger State, intercepted two Mitsubishi Canter with Reg. No XA-241-WEL and XC-166-SUL, respectively laden with 54 drums of smuggled petrol with a duty paid value (DPV) 1.9 million with two suspects.

“I want you to send this gospel to the enemies of Nigeria economy that this sector has stepped up extra measures to combat the influx of foreign rice smuggling and other prohibited items into the country.

“In our quest to sustain the tempo of aiding the Federal Government Policy on Agricultural Development in the area of boosting local rice production, the sector has also redoubled its efforts by recording a total of 225 seizures within the period under review. This include-

1 Locally made Pistol with a live cartridge

3,676 Jerry Cans of Petroleum Product of 25 litres each

66 Cartons of a different brand of Beers

78 Motor Cycles and one Keke Napep

“Finally, the sector has intensified efforts in the execution of the ongoing war against smuggling. Proven new strategies in line with world best practices in suppressing smuggling were utilized and the magnanimous support by the management and Comptroller General of Customs, Col. Hameed Ibrahim Ali (rtd) has enabled the Sector to achieve great results”.