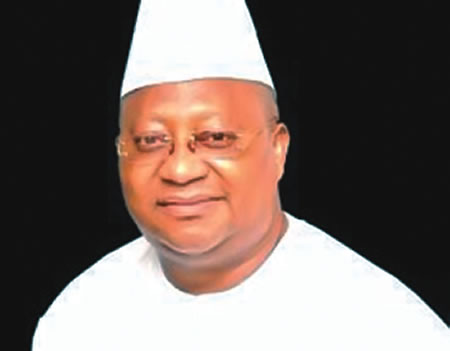 THE first Executive Governor of Osun State, Senator Isiaka Adetunji Adeleke, never used coercive force to realize his desires among his followers. Rather, he refined power and made it pleasant and motivational. His priority was collective goal achievement, instead of appropriating success in his various political offices to himself. Senator Isiaka Adetunji Adeleke made power, user-friendly and absorsive. The Asiwaju of Edeland applied resources meaningfully and impactfully for the benefits of a greater number of people, thereby spreading joy around those he held power in trust for. Today marks his 66th posthumous birthday anniversary: the first executive governor of Osun State, even in death, remains a political jewel of inestimable value and a golden fish with no hiding place. Senator Isiaka Adeleke political adventure was a departure from what obtains today among power-wielders, who are obsessed with it for their personal selfish interest. Otunba Isiaka Adetunji Adeleke in his 63 years sojourn on earth, expanded the coast of visionary leadership, that enabled his political influence felt in Osun State and beyond the shores of Nigeria. His political structure is enduring and superbly intact.

Senator Isiaka Adeleke promoted developmental politics that produced core loyalists and disciples, who could not be bought or sold for any price. And this informed a clarion call to his political admirers and well-wishers, far and near to close rank and ensure, that the unfinished business of 2018 governorship race is effortlessly and readily achieved in 2022 with greater zeal and vigour. For it is not over, until it is over. A house divided against itself cannot stand. I am sure, that the electorates in their innocent and inner recess of their minds are very ready to display their love and admiration for Senator Isiaka Adeleke nay Ademoal Adeleke, come rain or shine and boost his political gains. It is now for politicians to reciprocate the electorates love for Senator Isiaka Adeleke by sinking their whatever differences and make it a doable affair, with a view to making the Otunba of Ejigbo memory evergreen. They should make it a goal scored in a grand style for Senator Ademola Adeleke.

Asiwaju Isiaka Adeleke, even in death, remains a man of peace, apostle of politics without bitterness. A lover of the grassroots people. A stylish, consummate and accomplished statesman of no mean order. Senator Isiaka Adeleke taught his followers that they should not abhor malice, grudge and hatred in their minds toward fellow human beings. He stressed the need for the well-to-do among his followers, to always make the welfare of the less-privileged their priority, so as to bring out the best in the low cadre to contribute their own quota to the socio-economic progress of their areas. Alhaji Isiaka Adeleke, never saw politics as dirty as he was a man with good, large, forgiving heart and beautiful soul. All these attributes he applied very admirably to his practice of partisan politics. He gave politics the required courtesy and correct social application. Not for him is political acrimony. Above all, he was a firm believer in the supremacy of God Almighty as the Author and Finisher of our faiths. He held firmly to his Creator throughout the various vicissitudes of life that he passed through and conquered.

His well-wishers, should endeavour to complement the fantastic humanitarian and philanthropic gestures of the Adeleke dynasty, which has never failed to put smile on the faces of Osun citizens, without political or religious bias since Senator Isiaka Adeleke transited to glory about four years ago. The Adeleke Dynasty continues to hold high, Isiaka Adeleke political and philanthropic flags. It would not have been otherwise from a close-knit, big and happy family, that the Asiwaju of Ede belonged to. With all modesty, I counsel, that the biography of Senator Isiaka Adeleke, being put together by Adeleke University,  should not be abandoned, but see the light of the day as soon as possible, for generational benefits. The first executive governor of Osun State, would be very happy in his grave to have copies of the biography in various homes across the globe. After all, he was a man of high intellectual calling who made pursuance of education by the young people his cardinal objective. A very organized man with the gift of native intelligence, which he used maximally to greater advantage of greater number of people. In a video clip I came across recently, Senator Isiaka Adeleke was seen in a joyous mood with a teenage cultural artiste, whom he engaged in a dance, to the happiness of those around the scene. Otunba Isiaka Adeleke left the young cultural dancer happier as he patted her on the back after availing her crisp naira notes. That was Asiwaju Isiaka Adeleke. A man of immense humility.

There are more mileage to be covered by Senator Isiaka Adetunji Adeleke political school and corporate friends to uplift his legacies, without putting the entire burden on the Adeleke Dynasty who though they are not complaining. There should be payback days from beneficiaries of Senator Isiaka Adeleke’s large-heartedness. This therefore is to state for umpteenth time, the need to commence processes toward the establishment of Isiaka Adeleke Political Museum, through a veritable curator. The museum should serve as a centre of excellence for his political activities/career and positive contributions in general to humanity. His various personal items relating to his larger-than-life stature should be ably displayed at the Museum for preservation for generations yet unborn.As worshippers gather at the Isiaka Adeleke Memorial Mosque on January, 15 which is his 66th post humous birthday to observe Jumat Service, may all the DUAS offered, serve as forgiveness of his sins and Aljanat Fridaus. You are unforgettable, Senator Isiaka Adetunji Adeleke. A citizen of the world. A most colourful and harmless politician that ever passed through this way.

As you send sweet fragrance from your grave as a sign of your love for us, we also love you more. Happy (posthumous) Birthday Sir!

The British Parliament at the Westminster Hall held a debate on ‘e-petition 554150, relating to Nigeria and the sanctions regime’ on Monday. The government of the United Kingdom has however responded…Isiaka Adeleke    Isiaka Adeleke

The surprise visit made on Friday night by the leaders of the ruling All Progressives Congress (APC) to former President Goodluck Jonathan at his residence in Abuja triggered a stir in the major political camps, resulting in at least four possible theories..Isiaka Adeleke  Isiaka Adeleke