The long-awaited rains have come to ease the harshness of dry weather, heat and excessive dust and the people can now heave a sigh of relief. However, it may not be all comfort in the ancient city of Ibadan as residents, despite continuous sensitization, have started clogging drainage with refuse in what could be described as an invitation to flood. YEJIDE GBENGA-OGUNDARE reports.

Features
By YEJIDE GBENGA-OGUNDARE On Mar 6, 2020 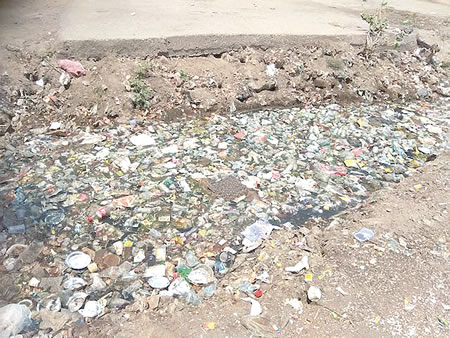 For a while, people have been longing for rain, mainly to ease the discomfort of heat and to relieve the burden of search for water in areas where the dry season dries up sources of water. And as the rains finally arrived, another challenge has arisen; across the ancient city of Ibadan, the Oyo State capital, the streets are filled with debris and waste of all kinds washed onto the roads from blocked drainage systems.

Over time, there had been series of enlightenment on the need to stop indiscriminate dumping of refuse, especially within Ibadan, a city known to experience perennial flooding. Indeed, flooding has been part of the history of Ibadan as far back as the early 1940s as the first flooding incident on record was when the Gege river which flows through a section of the city drowned the houses of those living around it in 1948. Also in 1963, a two-day downpour in July caused irreparable damage to properties along the banks of the major rivers that pass through the city.

More catastrophic was the June 1978 flood that followed a two-day heavy rainfall that totaled 137mm as well as the August 31, 1980 flood popularly known till today as omiyale, which ravaged the city and took away the lives of many with over 1000 people rendered homeless and properties estimated at over N407 million damaged.

The devastating effects of the August 26, 2011 disaster prompted the state government under Senator Abiola Ajimobi to vow to put an end to the menace by designing a comprehensive and deep-rooted solution to the continuous challenge of curbing flooding and mitigating its effects.

The proffered solution he came up with is the Ibadan Urban Flood Management Project (IUFMP), an initiative of the governor with funding support from the World Bank which is a special purpose vehicle to address all issues relating to flooding in Ibadan; reduce flood risks and improve solid waste management practices in Ibadan, increase knowledge of flooding and solid waste management, improve legal, policy and institutional environment for promoting desirable flood risk reduction behavior and  improve flood risk reduction and waste management behaviors by individuals, households and businesses.

The causes of flooding in Ibadan were through various researches attributed mainly to indiscriminate dumping of refuse on waterways. Research indicates that the number of rainy days in Ibadan has been decreasing while the total amount of annual rainfall is slightly increasing, causing a higher rainfall intensity per day while mismanagement of the environment; uncontrolled deforestation of hill slopes, blockage of natural drainage, encroachment of river flood plains and unethical human activities along flood plains like indiscriminate dumping of refuse have increased the runoff rate into streams and rivers, bringing about overflowing into abnormal channels.

But it seems people are yet to learn their lesson in the city of Ibadan,

Nigerian Tribune’s investigation revealed that no area is exempted from indiscriminate dumping of refuse as drainage systems across Ibadan have been blocked after just few rain fall.

For flooding to be curbed in Ibadan, there is a need for properly managed sustainable drainage systems in order to help manage surface water runoff. But while government is trying to keep drainage unclogged, the people appear not to be on the same page with government and a soon as there is a little rain, they gather their waste and dump into the drainages. This blocks waterways and causes overflow into homes, while refuse is washed into the roads, littering the environment and constituting risks.

To compound the challenge, neighborhoods keep springing up in Ibadan without proper planning, which means there is no foresight to clear water ways or put drainags in the right position. Residents regularly dump their wastes in gutters and this clogs the gutters and prevents the flow of water, causing the gutters to overflow.

In Ibadan, it is a norm seeing flooded streets with litter floating everywhere after a short period of rainfall and this creates unsanitary condition for residents, contribute to the degradation of the environment and poses health risks for the community.

It has been said that as the annual rainy season has commenced, in order to avoid lethal floods in Ibadan, it is important to have an effective drainage system that would not be clogged by waste and abnormal human activities that will hinder free flow of water during and after downpours. Clogging of waterways also gives rise to environmental pollution problems which affect the health of residents across the city.

Speaking on the issue, a resident, Seun Ajayi, who lives in Basorun area of Ibadan said, “I do not understand why people take joy in dumping refuse in gutters any time there is little rain. They do not even consider that this can cause deterioration of health due to the increase in waterborne diseases and unsanitary conditions. We are exposed to numerous air and waterborne diseases if we have our environments polluted with stagnant water. It is disheartening that even educated people engage in this.”

Speaking on what the government is doing, the Commissioner for Environment and Water Resources, Kehinde Ayoola, told Nigerian Tribune that, “As a matter of fact, we are planning a press conference on this to make the public understand the hazards in this. We only want to urge our people to desist from this, it is a way of encouraging flood because when solid waste gathers down the river channel and if there is a bottleneck down the channel, narrowing down the channel, the solid waste will be locked down there and water will be forced to go elsewhere, meaning it will cause flooding which is not good. People should please stop dropping their wastes inside rain water or water channels.”

“That is what we will say for now. Another thing I will say is that the government has set up an environmental task force to apprehend all environmental offenders who will be taken to court and prosecuted according to extant environmental laws and regulations. And this does not permit for any kind of favouritism; whether you know the governor or commissioner doesn’t count, if you are caught, you will be duly and properly prosecuted and the full weight of the law will be meted out to such persons. That’s what I want to say, don’t do it, if you do, you will face the law.

“We have never encouraged wastes on the street, we are working assiduously day and night and in the next few days, the public will know because we have a new waste management architecture which will begin to run. It involves licencing of many waste companies who have applied and we are evaluating, they will be assigned to different routes, people are encouraged to have waste receptacles, they will only pay a token,” he said.