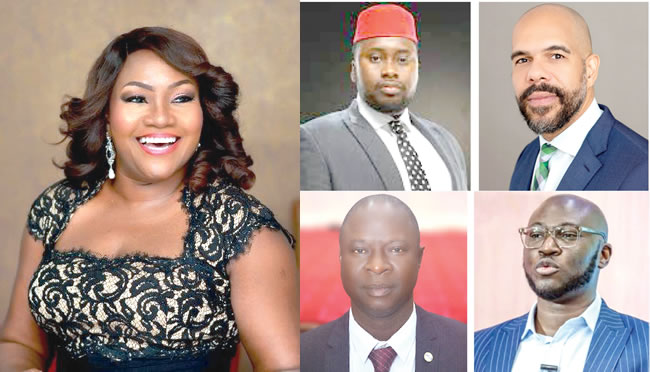 A strong company is a joy of all stakeholders; shareholders, employees, contractors, government and even the community because of the high return on investments for shareholders, good wages for employees, high profile jobs for contractors, good taxes for the government and impactful corporate activities for the community. But great companies don’t just happen, certain factors make them happen.

But what constitutes strong leadership? Is it the leader’s vision, drive or acumen? As important as these are, they do not form the fulcrum of strong leadership. Strong leadership is not determined by the stretch of a vision, the depth of knowledge or the extent of passion, it is determined by the leader’s self control. Self control is the anchor that stabilizes the ship of an organization, it is the force that keeps the leader from going overboard, it is the track that keeps the train of the organization on course to arrive at its predetermined destination despite twists and turns. Hence, as observed by John Wooden, the legendary American basketball coach who won a record seven NCAA national championships in a row, “If you lose self control everything will fall.”

An organization’s slide begins when the leaders’ interest in themselves is higher than their interest in the wellbeing of the organization they lead and the people over who they superintend. Many leaders derail because they do not understand why they are in office. No leader is ever put in a position to look out for his own interest; every leader’s primary responsibility is to make both the people and the organization he leads better.

It is for this reason that strong leaders are critical to the long-term success of an organization. If the leader is strong enough to overlook his own interest for the good of all, then the sky is the limit for the organization. If a leader can curtail his own excesses, he will not condone any excess from anyone else; if a leader is able to rein in his own greed, he has already put himself on a platform that will empower him to deal with any unwholesome tendency from any quarter. Every company that went under did so because of the selfishness of the leaders.

The rise and fall of Fumman Agric Products

Fumman Agricultural Products Industries, Ibadan, started on a very good note. After the acquisition of the former Lafia Canning Factory in 1994, the company, which commenced operations in 1996 with just a two-line plant, grew it into a multi-line facility, producing a range of fruit juices, nectar, drinks and water. The company produced wholesome fruit juices that were the toast of many, not just in Nigeria but across the West African sub-region. The company brought innovation to play when it pioneered the industrial processing of passion fruit and guava.

To control the quality of its major input, Fumman Agricultural Products established an expansive farm in Orile Osupa, Ajaawa in Oyo State. This ensured all year round supply of fruits for its production. At that point, Fumman was ready to take over the juice production industry. To increase its financial fitness, the company went into private placement in 2010 and sold some of its shares to select investors.

But the tide turned when the company took a loan of N2billion from a bank to buoy its business. This marked the beginning of its slide, according to many of its employees, due to the failure of its leadership to deploy the loan for its intended purpose. This resulted in the company’s inability to meet its financial obligations to the bank after the expiration of the 15-month moratorium. With the insistence of the bank on the company servicing its debts, salaries became irregular, payments to contractors and suppliers were delayed and it became obvious that the once highly rated Fumman Agricultural Products was going down. When it became apparent to the bank that the company lacked the capacity to pay back the debt, the process of a takeover commenced and was concluded on November 23, 2015 when the company was put under lock and key with the appointment of a receiver by the bank.

When leaders are not strong enough to put their greed in check they put a whole lot of people in trouble.

Employee productivity is the value employees create on an hourly basis. This is determined by a number of factors.

Skills – Skills are the abilities of the workforce which enable them to perform certain functions. The primary reason for the engagement of an employee is the acquired skills.

A manufacturing company had a problem with one of its machines and invited an expert to have a look at it after its technicians and engineers had failed to fix it. After spending about 15 minutes fiddling with the machine, the expert brought out a small hammer and tapped for about 30 seconds on a part of the machine. He then asked the plant supervisor to start the machine. Immediately, the machine that had been inactive for about 10 days roared into life and started working.

While the company engineers had skill, the expert had knowledge, because of his ability to apply the knowledge to solve a problem.

Resourcefulness – Resourcefulness goes beyond doing more with less; it is the ability to optimize available resources to achieve set objectives. Resources are hardly ever enough but those who are resourceful are still able to achieve stated goals in spite of the shortage of resources by looking inwards and outwards to overcome their challenges.  Being resourceful has less to do with insufficient tools or funding but more to do with deploying available resources into finding a way out of a labyrinth. If a company’s workforce is resourceful, the company achieves a lot despite limited resources.

Creativity – Creativity is doing new things or doing old things in a new way. Nothing shoots up the profile of a company than the creativity of its workforce and nothing sends a company to the Gulag faster than its workforce’s lack of creativity. If a workforce is creative, it will be able to come up with products and services that satisfy the yearnings of the market and this will improve the profile of the company as well as its bottom line.

A company’s primary connection with the outside world is its products or services. If a company does not have good services or great products, it does not matter what other good things it has, it will not last the distance. Anyone who picks a product expects certain values from it. If on a consistent basis the product keeps falling short of his expectations, then the customer will be left with no option other than to take his custom elsewhere.

But what makes a great product? The essence of a product is to meet needs that people are willing to pay for; that is functionality. A product must be functional, otherwise it will fail. It must also be consistent in satisfying this need, this is reliability and must be easy to use. So, the greatness of a product is in keeping the customers satisfied in such a way that they want to keep exchanging their money for it.

However, that is not all there is to being an exceptional product. A product must also be emotionally resonant with the customer because emotions are the primary reason consumers choose a brand over another. If a product emotionally resonates with a customer, the customer gets hooked to the product and keeps asking for more because purchase decisions are made by the emotional centers of the brain. If a product does not pull at the customers’ heart strings and endear them to it, irrespective of what qualities it may parade, its survival will be greatly challenged. So, for a company to be strong and great, it must have on its parade products that have emotional resonance with customers.

No company can become anything of significance without an appropriate strategy. Without a good strategy, a company will just keep going round in circles and will fail to make any real progress. So, critical to the growth of a company and its sustainability is great strategy.

A good strategy identifies what to be done, how it should be done and who should do it within what time frame. This usually is not arrived at by a flight in the night but by a series of rigorous reflection.

Great leaders know that no strategy is eternal, so they never stop tweaking their strategies to make them better.

According to Peter Drucker, every business exists to create customers. Since no wise organization will create customers to lose them, strong companies usually have good customer relations. The essence of this is to make customers happy with a view to remaining in their consciousness. Great companies take feedback from customers which they use to improve their offerings and as a result keep their customers happy. For as long as the company or its products remain in the consciousness of the customer, patronage is assured.

But aside using feedback from customers to keep them happy, great companies also use it as a learning opportunity to gauge the gap in the industry and come up with new products. As observed by Bill Gates, “Your most unhappy customers are your greatest source of learning.” So, by listening to customers’ complaints, companies position themselves to convert a patent disadvantage to an opportunity to improve their profile.

While every company plans to be strong, it is only those that are able to pay the price that achieve the aim.

How many books have you read through this year?

How to be a great leader and have loyal customers

Why some organisations remain poor

Avoiding the trap of analysis paralysis

The powerful and the forceful