Gunmen kill masquerade, 6 others in Kogi 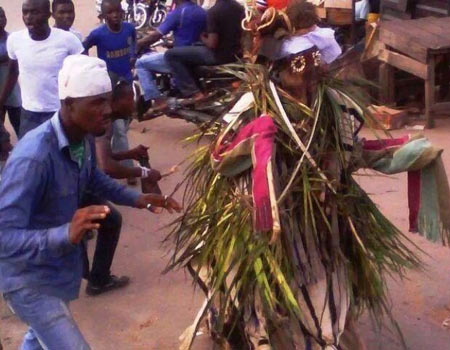 Palpable fear and tension have gripped some communities in Kogi state as no fewer than seven persons, including a masquerade were killed in Okene and Ofu local government areas of the state by unknown gunmen.

The annual “Eche-Anee” in Okene town turned bloody on Tuesday as some assailants attacked the masquerade and rained bullets on him.

Eyewitness account of the incident said the masquerade and its followers were in procession of some major streets of the town when the two men on motorcycle attacked and killed four of them including the masquerade.

The development was said to have led to pandemonium as others in the celebration ran for safety, while shop and business owners in the vicinity quickly locked their shops for fear of being attacked.

In the same vein, three members of the vigilante group in Ofu Local government area of the state were allegedly killed on Monday night by yet to be identified hoodlums.

The deceased were said to be conveying three suspected criminals they earlier arrested to Ugwolawo Divisional Police Office at the council headquarters when they were attacked.

The hoodlums were said to have laid ambush for the vigilante members at Ahi village and opened fire at them, killing the three of them.

The assailants later escaped with the suspected criminals being transported by the vigilante members.

A relation of one of the slain vigilante members, Musa Abuh, alleged that there was communication between some people in Ahi village and the bandits, who had been giving them information on the movement of the vigilante group and arrested suspects.

The state governor, Alhaji Yahaya Bello, in a statement warned that any masquerade caught parading the street would be arrested alongside those behind him.

However the Kogi state command of the Nigeria Police could not be reached for its reaction over the incident as the calls put through to the mobile line of the Police Public Relations Officer (PPRO), William Aya, were not picked.

Gov. Bello charges monarchs to ensure peace in their domains