Group commends Alaafin’s commitment to education,as another Private University set to take off in Oyo 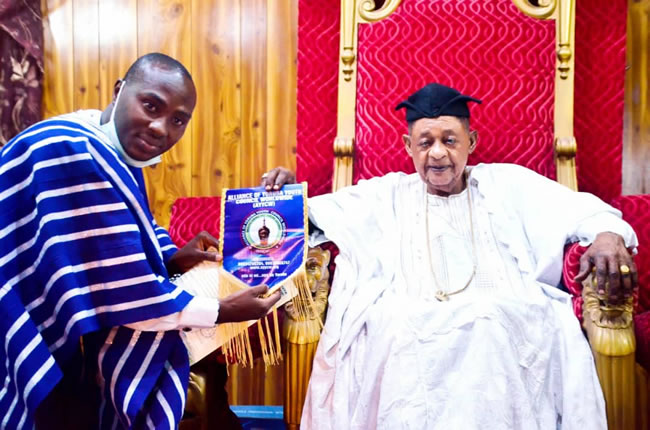 A group, Alliance of Yoruba Youths Council Worldwide (AYYCW), has commended the Alaafin of Oyo, Oba Lamidi Adeyemi over his commitment to education.

This was stated in a release signed by the president of the group, Dr Akande Kazeem on Wednesday, in celebration of the 50th coronation anniversary of the monarch.

The group in the release commended the monarch for his exemplary style in leadership, commitment to growth and development of Oyo kingdom and Yoruba race.

Also, the group lauded the monarch for the facilitation of the establishment of a private university in Oyo town ,Oyo State, in affiliation with Espam-Formation University Benin Republic, Cotonou which, according to the release, will soon take off.

“His lmperial Majesty,Alaafin of Oyo, Oba (Dr) Lamidi Adeyemi ,who is currently celebrating his golden jubilee anniversary celebrations on the throne of his forefathers has been commended for his exemplary leadership style,commitment for the growth and development of Oyo Kingdom and the entire Yoruba land since he ascended the throne fifty years ago.

“Oba Adeyemi, in his desire for educational growth of sons and daughters of Oyo town, is currently facilitating the establishment of a private university in the town which will be an affiliate to ESPAM-Formation University based in Benin Republic and a large expanse of land has been donated for the project which will take off soon.

It was also disclosed that scholarships will be awarded to indigenes of Oyo and environs.