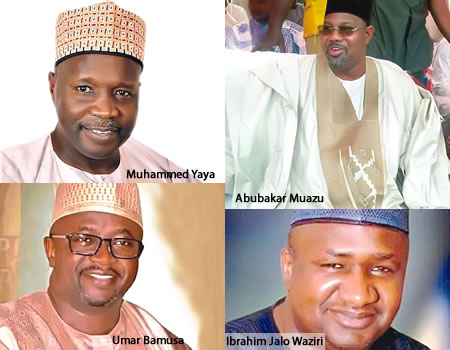 As the Gombe gubernatorial race heats up, many politicians have indicated their interest to pick the ticket of their respective political parties. ISHOLA MICHAEL in this report examines the actors in the race and their antecedents.

There are many fighting for control of the seat of power in Gombe State but the battle seems to be between two major platforms; the All Progressives Congress (APC) and the Peoples Democratic Party (PDP).

Leading APC contender is Alhaji Musa Umar Farooq, popularly called Farouk Bamusa. He is a strong chieftain of the APC, a consummate businessman and industrialist of high repute who has been in political scene for a long time since the inception of the present democratic dispensation in the country.

ALSO READ: Mandatory use of NIN to commence January 1st, 2019

A Farouk Bamusa is from Kwami Local Government area of the state and holds the traditional title of Sarkin Arewa Gombe. His foray into the gubernatorial race is said to have triggered fear and tension among other aspirants especially those in the camp of the State Governor, Ibrahim Hassan Dankwambo, many of whom are said not to know who the governor will endorse and give his support.

Bamusa is not only a grassroots politician; he has been described as a humble bridge builder with connections across the country.

Bamusa was born on March 13, 1963. He attended University of Maiduguri between September 1981 and June 1985, where he graduated with a Bachelor of Science degree in Business Management. He is a respected administrator, who many testifies is a man of honour and high moral character coupled with his generous and friendly attitude particularly to the downtrodden.

While giving out cash gifts at the party’s secretariat before the Sallah celebration, Bamusa said that it was part of his own contribution towards supporting the party officials to celebrate the Muslim festival because according to him, the APC as an opposition party in the state has many challenges, especially lack of financial resources, as such, the expectations and needs of their followers and loyalists may not be fully met by the officials.

The APC party chairman in the state, Mr Nitte Amangal, stated that the party is aware of his activities in supporting it, describing him as one of the main pillars of support of the APC in the state. Based on his antecedent and the love people in the state have for him, Bamusa is considered as the leading aspirant within the APC fold.

Abubakar Habu Muazu is another contender for the APC ticket in the state who following the election of the state executives of the party after two years of crises, called on the party’s executives to continue to hold political activities as a way of consolidating on the gains of the new found unity of the party.

Muazu, a chieftain of the party in the state is known for his philanthropic gestures across communities in the state. Habu Muazu who is the Yariman Kashere, has been described as an astute political bigwig in the state having been the youth leader during the administration of Senator Danjuma Goje as the governor of the state for eight years. He is a crowd puller and is loved by the people of the state particularly the youths who he has always identified with.

He has never hidden his intention to govern the state since he joined the APC and has been campaigning vigorously to win the attention of the party members in the state and is seen as the aspirant to beat.

As the gubernatorial race heats up in Gombe State, another frontline member of the APC who has his eyes on the ticket of the party is Khamisu Ahmed Mailantarki. He indicated his interest at the party secretariat in Gombe before his supporters, the state chairman of the party,  Amangal and executive members of the party where he assured that if given the ticket, he has all it takes to wrestle power from the PDP controlled State government.

According to him, the PDP government of Governor Ibrahim Hassan Dankwambo has failed the people of Gombe State in many areas and he is the only experienced candidate that has what it takes to take power from the PDP in the state.

He stated that the APC needs a grassroots politician of his caliber who has a wealth of experience following his successes during his tenure as member representing Gombe/Kwami/Funakaye Federal constituency from 2011 to 2015.

Khamisu Mailantarki, who prides himself as the most consistent and loyal politician among the aspirants in the state said it is proper for the party to actually look at everybody’s records and ensure that whoever must emerge in APC must be a loyal and committed party member saying, “Considering my age, experience, achievements as a former member of the house of representative and also my effort in building the party in the state, I think I deserve to be the party flag bearer”.

He is seen as the underdog among the aspirants despite the fact that he is basking on his records as the Executive Chairman of Gombe Local Government Council during the tenure of his father in-law, Senator Muhammed Danjuma Goje when he was the Governor. He was also the National Chairman of ALGON during the period when local government councils had elected leadership.

It is however not clear if he will be able to stand among the other aspirants who have more stalling political pedigree than him but notwithstanding that fact, he is an aspirant who has hope of winning the party ticket.

He is regarded as one of the top contenders because he has been on the political scene of the state for a long time, he even served as the Senator representing Gombe Central as well as Minister under the Yar’adua/Jonathan administration.

He is loved by the people of the state and is said to be the favourite of those in charge of the affairs of the party. However, there may be a challenge as the delegates may not be disposed to his political style of leadership and may therefore not give him the party mandate.

Mohammed Inuwa Yahaya is another contender who has been campaigning vigorously to ensure that he wins the ticket of the APC having aspired before, got the party ticket against all odds in the 2015 elections but lost the gubernatorial election to the incumbent Governor, Ibrahim Hassan DanKwambo of the PDP.

If he however wins the ticket, there are speculations that history may repeat itself and the same scenario may play out as it did in 2015 when those who lost the ticket to him refused to support him for the unity and success of the APC in Gombe but rather went ahead to work against the party at the election, just to spite him.

This division is said to be rearing its head again because the immediate former Governor, Danjuma Goje does not seem to know how far his favourable disposition towards Mohammed Dan Barde is creating a divided house within the Gombe APC; this however is the opinion of some members of the party.

Inuwa Yahaya has garnered some experience in governance as well as politically and in the business world and these is some of the background points that he is building o to once again win the party ticket for 2019.

Many are of the opinion that unlike in 2015 that Yahaya got the ticket with ease, it may not be so this time around as the the role of party leader and godfatherism may work against him.