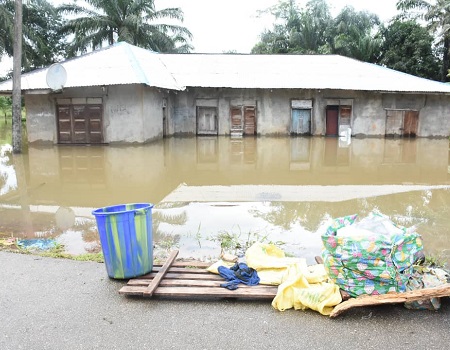 Following the flood that displaced many residents of Ese Odo Local Government Area of Ondo State, the state government has directed all public Primary and Secondary Schools submerged by water in the area to embark on a three weeks break.

This was contained in a statement issued and signed by the state Commissioner for Information and Orientation, Mr Donald Ojogo, who said the development became imperative in order to protect the lives of the pupils of the schools.

Ojogo said the three weeks period was given in order to allow the water to recede and also to protect valuables from avoidable destruction.

The statement by Ojogo reads, “following the flash floods that have affected most flood-prone communities, especially in the riverine areas of the State, Governor Oluwarotimi Akeredolu, SAN, has directed public Primary and Secondary Schools submerged in the floods to proceed on a three weeks holiday beginning from Monday, October 14, 2019.

“This becomes necessary in order to forestall possible attendant incidents that may likely affect lives of vulnerable pupils in those areas as a result of the floods. It is also aimed at protecting valuables from avoidable destruction.

“All Head Teachers and Principals are to enforce this directive; and in particular, ensure that all perishable educational materials are evacuated while Government works out remedial logistics believing that the floods would recede within the period of the three weeks holiday.”

Several residents of the area have been sacked from their homes following several days of heavy downpour while commercial activities had been paralysed for days following the torrential rain.

Some of the communities which included Igbobini, Iluagbo, Sabome, Inikorogha, Oboro, Ojuala, Ipoke and Igbekebo, the headquarters of the local government, where hundreds of houses were submerged, rendering thousands of the people in the area homeless.

Apart from this, many of the residents of the area have been living under canopies erected by the community leaders where residents take shelter on the major roads in the town.

All the roads linking the communities including Igbobini-Irele road had been cut off forcing the people to use canoes to access their destinations.

General Buratai: Many generals in one