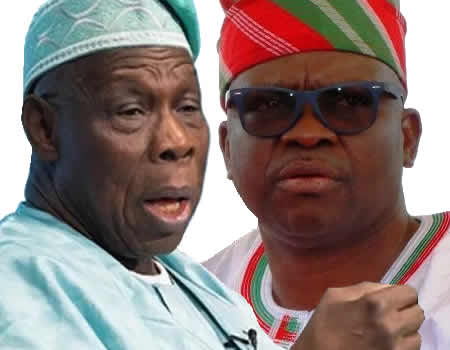 Ekiti State Governor, Mr Ayodele Fayose has told former President Olusegun Obasanjo stop deceiving the world with his anti-corruption posture, saying; “the former president is the father of corruption in Nigeria, who sits on stolen wealth. He lacks moral rights to accuse anyone of corruption and I challenge him to explain to Nigerians the source of his stupendous wealth.”

Governor Fayose, who was reacting to comment credited to Obasanjo that African leaders should ensure that treasury looters are exposed and his warning of former Attorney-General of the Federation (AGF) and Minister of Justice Mohammed Adoke to stop mentioning his name in the controversial $1.09 billion Malabu Oil deal, said the former President should rather explain to Nigerians the source of his stupendous wealth.

In a release issued on Thursday, by his Special Assistant on Public Communications and New Media, Lere Olayinka, Governor Fayose said it smacked of the highest level of hypocrisy for someone like Obasanjo to be sermonising about corruption, having superintended over a corrupt government himself.

He said the former President must come out clean on his roles in the controversial $1.09 billion Malabu Oil deal, instead of warning former Attorney-General of the Federation (AGF) and Minister of Justice Mohammed Adoke to stop mentioning his name in the deal, adding that; “It is on record that the out-of-court settlement on the controversial Malabu Oil Block was initiated in 2006 during Obasanjo’s administration.”

Governor Fayose, who maintained that Obasanjo’s accusing anyone of corruption was like “Oyenusi accusing Shina Rambo of armed robbery”, challenged the former President to explain to Nigerians the source of his stupendous wealth, saying; “We saw how Obasanjo was when he became president and the magnitude of both direct and indirect investments that he has now. Can he in all honesty tell Nigerians that he acquired his wealth through legitimate means?”

“Has Obasanjo forgotten how many billions of naira was deployed to lobby National Assembly members to support his third term agenda?”

“Has he forgotten so soon that it was during his tenure that sacks of money were displayed on the floor of the House of Representatives, as bribe money given to some Reps members to impeach the then Speaker, Ghali N’abba?

While reiterating his demand that the former President should refund with interest, the N10 million that he was forced alongside other governors to donate to his Presidential Library project, Governor Fayose said; “Someone like Obasanjo, who used his position as President to extort money from governors, businessmen and contractors to build his presidential library lacked more rights to accuse anyone of corruption.”

He said “other Nigerians who left offices as President are still relevant to their people, but can the same be said about Obasanjo? Was he useful to the Yoruba race as President and now as former President? The bad state that he left major roads linking the Southwest to other zones in Nigeria, especially the Lagos-Ibadan expressway remains a pointer to this. Yet, he goes about postulating as if he is the only honest Nigerians who can make things right in the country.”