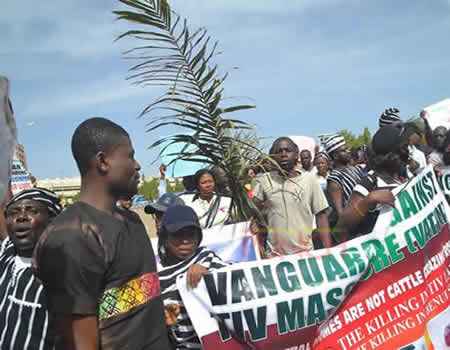 Angry protesters  from  Benue and Nassarawa states, on Thursday, shut down the National Assembly for  several hours protesting against the incessant killings of their kinsmen by the Fulani herdsmen and failure of the government  to call them to order.

Combined teams of security agencies comprising the Police, Department of State Services (DSS), Civil Defence and Sergeant at Arms were quickly mobilised to the scene to maintain law and order.

Followings this development, the main entrance and other gates  to the premises were shut down for human and vehicular movements for hours.

The protesters who came armed with banners and placards with inscriptions such as: “It’s only in Nigeria that cows are more important than humans;” “We voted you to protect us, not watch us killed, take action.”

They took over the main entrance of the National Assembly, leaving lawmakers, staff and visitors stranded for hours.

Consequently, some resorted to trekking in, others who were informed of the protest drove through the entrance leading to the office of the Secretary to the Government of the Federation.

The protesters in their hundreds dressed in black attire chanting various native songs occupied the main entrance thereby preventing the lawmakers, staff and visitors from gaining entrance into the premises.

At a p point the representatives of the  Speaker, Hon Diri Duoye and Mojeed Agboola came to address the protesters and pleaded with them to go back home and maintain peace as their complaints were already  being  addressed.

However, the protesters insisted on speaking with the Speaker  of the House of Representatives or the President of Senate failure which they vowed to continue to occupy the premises.

Speaking with reporters, the co-convener of VATM, Terso Akula, said the protesters wouldn’t not leave until they are addressed by the Speaker or they will stay here as long as it takes us to get the right kind of response we wanted.

Akula accused the Federal Government of “looking the other way, while Benue indigenes are killed and their farms.”

This he warned that communities in Benue State may resort to protecting themselves owing to the silence from the Federal Government.

According to him, “the situation has gone beyond what the Benue State government can handle, hence the urgent need for President Muhammadu Buhari to intervene.

“We are concerned about the slow response of the Nigerian government to attacks in Tiv land and Benue State. We are totally dissatisfied with the response of the Federal Government to the crisis in Benue State. It’s over two weeks, that people have been running helter-skelter following the recent attacks and not one person has been arrested or is there hope that anyone will be prosecuted and this kind of scenario has been recreated in the past 12 years in Benue State.

“These herdsmen travel thousands of kilometres to come to Benue State where they kill people and destroy their property, they go back the same way, yet nobody has been apprehended. We believe there is conspiracy going on because Nigeria has some of the best security agencies in the world, how come they are not able to track these people who walk to and fro on foot to commit crime?

“In fact, sometimes they occupy the land after killing people and those alive flee the areas and yet no person is arrested. This is why we are here to speak to those who can take action. We are here to tell them that Benue and Tiv,” he stated.