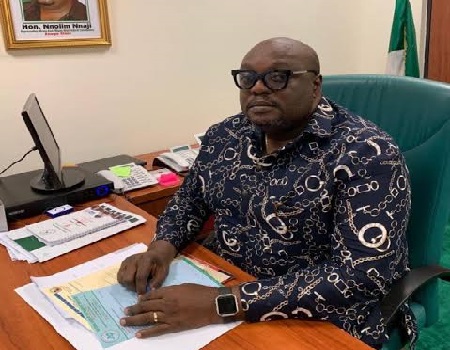 The Chairman House Committee on Aviation, Honourable Nnolim Nnaji has condemned the flagrant abuse of the safety protocols put in place by the Federal Airports Authority of Nigeria(FAAN) and the Nigerian Civil Aviation Authority (NCAA), in line with the Nigerian Centre for Disease Control (NCDC), for the reopening of Air transport services.

Honourable Nnaji who was reacting to the reports of some highly placed Nigerians who refused to subject themselves to the health protocols instituted at the airports to safeguard the lives of airport workers and passengers against the deadly coronavirus urged FAAN and NCAA to ensure that those who refuse to subject themselves to the protocols are denied future access to the airports.

He said it was regrettable that people who pride themselves as leaders rather than show examples chose to exhibit this type of indiscipline to endanger the lives of both airport workers and other users of the airports.

“This type of behaviour can not be tolerated. It is not a must that you have to travel by air but if you choose to, you must abide by the laid down procedures established by FAAN and NCAA in line with the NCDC guidelines”  Honourable Nnaji stressed.

He urged the leadership of the agencies to be firm and reiterated the need for the frontline staff especially the airport security and Health officials to be courageous in carrying out their duties to ensure that every passenger no matter the status observes the protocols.

Honourable Nnaji who represents Nkanu East/West Federal Constituency, Enugu State in the House of Representatives, further declared that the entire members and leaderships of National Assembly were totally behind the aviation agencies and the frontline staff in carrying out their duties.

Honourable Nnaji added, “am sure the executive and judicial arm of government is equally behind them. A lot of money has been sunk into the industry to meet the criteria in terms of protocols, training and materials deployment by the Airline operators and FAAN, therefore the government cannot tolerate any acts that will rubbish the whole essence”.

“I want to also assure Nigerians that we in the National Assembly have resolved to abide by the protocols and we will not allow anyone no matter the position in the society to unnecessarily endanger the lives of Nigerians”, he further stated.

Buhari reads riots act to ministers, MDAs, others on relationship with NASS