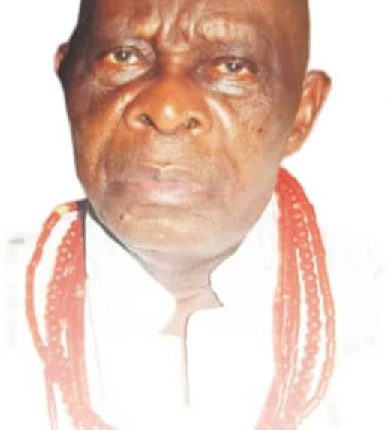 Chief Thomas Itulah Aire, the father of two-time Speaker of the Edo State House of Assembly, Friday Itulah, is dead.

Chief Itulah of the Aire dynasty of Amedokhian-Uromi, passed on at the age of 91 years.

Until his death, the late deceased was the Ofure of Uromi Kingdom.

A statement from his family described him as a devout Christian, a great philanthropist, a community leader and a seasoned businessman who was a prominent dealer in rubber products as well as a great transporter.

He owned several transport lines and was popularly known with the motto: “GOD IS MY LEADER.”

The statement signed by the former member of the House of Representatives, said: “The great Iroko has fallen. The Primogenitor of the Itulah Aire dynasty, Chief Thomas Itulah Aire has gone to be with the Lord. He passed unto glory this morning at the ripe age of 91 years.”

The statement informed that late Chief Aire is survived by many children, grand and great-grandchildren, saying that burial arrangements would be announced later by the family.

In spite of the huge investment in the water sector by the government and international organisations, water scarcity has grown to become a perennial nightmare for residents of Abeokuta, the Ogun State capital. This report x-rays the lives and experiences of residents in getting clean, potable and affordable water amidst the surge of COVID-19 cases in the state.Ex-Edo Assembly Speaker loses father

The Lagos-Ibadan railway was inaugurated recently for a full paid operation by the Nigerian Railway Corporation after about a year of free test-run. Our reporter joined the train to and fro Lagos from Ibadan and tells his experience in this report…Ex-Edo Assembly Speaker loses father

Why I reconciled with my Bauchi counterpart ― Ortom