• Says devolution of power a panacea 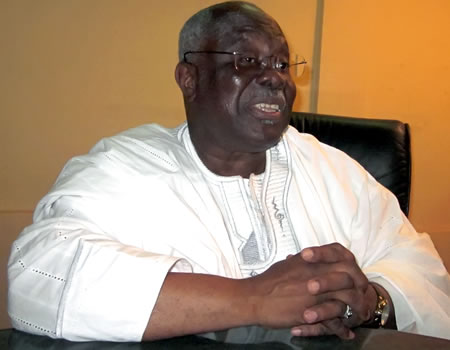 Former Deputy National Chairman of Peoples Democratic Party (PDP), Chief Olabode George, said, on Thursday, that the nationwide peaceful protest against the former Special Anti-Robbery Squad (FSARS) has gained a new dimension which no one should ignore, noting that the restlessness of angry youths was a reflection of the general distortions in the country’s polity.

George, who is also the Atona of Oodua of the Source, said this in a signed statement titled: “The System is not Working,” copy of which was made available to newsmen.

The elder statesman, while declaring that the system had failed, said it had foundered on the rocks, and, therefore, needed to be changed and reconfigure for the good of all the citizens.

“The nationwide peaceful protest against the former Special Anti-Robbery Squad has gained a new dimension which no one should ignore. The restlessness of our angry youths is a reflection of the general distortions in our polity.

“The system is not working. It has foundered on the rocks. We must change and reconfigure the warped, unworkable system for the good of all our people,” George said.

According to him, there are dislocations everywhere evidenced in hunger, unemployment, under-employment, corruption, greed, nepotism and all sundry ills tearing the nation asunder, declaring: “A nation of about 200 million people policed by a meagre 400,000 ill-equipped, ill-trained, ill-paid police force is anarchy waiting to happen.”

“The protesting youths at the two ends of Lekki Toll gates, in Abuja, in Warri, in Katsina and in virtually all our capital cities across the nation have been provoked to seize the gauntlet because they cannot perceive a meaningful future for themselves in an environment where one man without a visible industry can parade three private jets and a limitless convoy of bullion vans as a war chest at any time,” he said.

“We have lost our national ethos and traditional bearings while little men and their families appropriate our commonwealth,” he lamented.

George said there was a need to empower the youths through various skill acquisition programs and make the nation’s economy more vibrant, for this restless and justifiably angry generation, declaring that the ultimate solution to this broken system was power devolution.

The PDP chieftain, while calling for devolution of power, argued that the present structure was too centralized and making it far distant from the diverse communities making up the country.

“The ultimate solution to this broken system is power devolution. The present structure is too centralized, too dominated by an arbitrary powerful centre that is very distant from the local nuances, the complexities and various distinctions and challenges of our diverse communities,” he said.

“We can take our youths away from the streets not through force, not through violence but by restoring their dignities through a more equitable, fair, just, open and more competitive society where the children of the rich and the poor have the same opportunities to actualise their destinies,” he counselled.